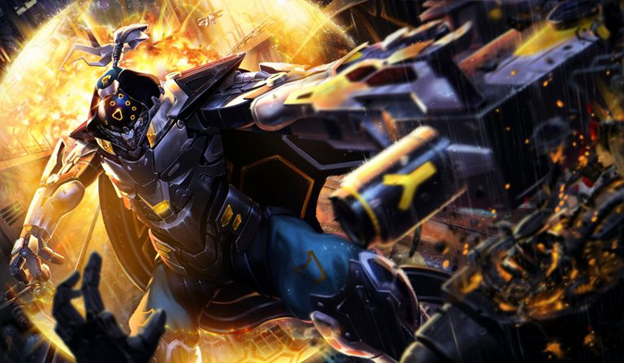 Inspired by various films, the world in the Project universe is a place where Project machines and corporations have complete control.

There are warriors against the forces of mechanics, there are also villains on the side of the Project group, in general, most of the champions who own the Project skin are extremely powerful champions.

However, Riot Games seems to have forgotten that in his story, Jax was so powerful that he defeated others so easily, one had to take away his weapon and Jax was forced to use a lamp as a weapon. Even in the game, Jax is also one of the most powerful top champions currently

And the fact that Riot forgot to create Project Skin for Jax has made fans design it for themselves. Most recently, an artist named Adrien Gonzalez designed Project Jax in black and white, accompanied by beautiful effects of skills.

Similar to the previous costumes, Adrien Gonzales – has also invested very detailed in Project: Jax. With similar style to the old costumes, it exudes the appearance of Jax’s total machinery with the main color is orange.

Before deciding on the final role model, Adrien also created many different character models and extremely diverse. Thereby, we can see, the enthusiasm and the investment of this guy to show his love for his passion.

All 9 models have a huge change in head, eyes, outfit, gown, until the position and morphology of the “eyes” of Jax. The meticulousness of the guy is awesome!

In addition to the heavily-invested winged cloak, the most prominent thing in this costume is the Jax weapon used instead of his lamp. “Imagine if I had a real weapon.”, And now he had a hammer in his hand with a solid body of machinery.