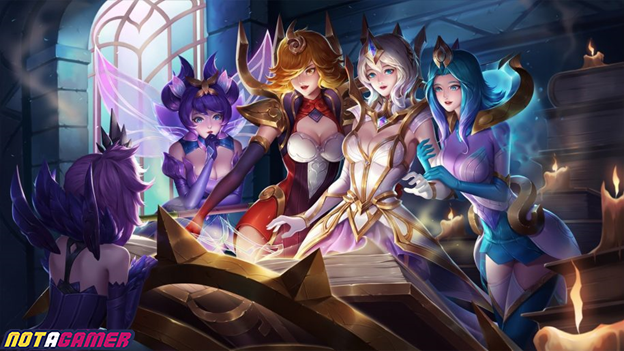 Summoner’s Rift is where the greatest warriors of each region come to fight to protect their people and homeland, a place where warriors have no place to return to find a new path.

And in it, there are also champions with noble hearts who want to use their power to protect the little beings, no matter where they come from.

Heartbroken when humanity was immersed in chaos, uncertainty and suffering, Soraka decided to go down to earth to restore the world order. She chose for herself a human form, endured pain when magic burned each part of her body and began her journey.

Soraka is helpless to see people destroy their destined destiny, then rejoice when the problem is solved. Soraka found a new direction for herself. She now seeks to show the way and enlighten people, instead of taking care of them, to help people find their own destiny in their lives.

Soraka’s kindness is spread everywhere, from the Freljord to Zaun or Ionia. Soraka learns how to save selectively instead of trying to save the corrupt people completely from the soul. Although Soraka is still suffering because of the constant destruction that humans make themselves, Soraka still tries.

It is believed that Janna is a goddess born from sailors’ wishes wishing for wind when crossing dangerous waters and storms. No one knows where she comes from or how to call her, only knowing that once they need help, Janna is always there.

Whether helping the adventurers go through new waters, take the boat out of danger, and in moonless nights, wrap around the sailor’s shoulders with warm breeze or punish those who go off to sea bad, she was also happy to take care of the oceans in Runeterra.

The more prayers are taken, the more powerful Janna becomes. She is not only a protective deity on the high seas, but even when the sky is dark with the chemicals scattered, Janna is always there to save the people who are sinking in misery.

Victor was never a bad person, just because his thoughts were a bit eccentric and inappropriate. The story of Victor and Jayce is only contradictions on the views and stances of two individuals who do not share the same thoughts.

Victor has always been an enthusiastic heart scientist. All his life he was always thinking about how to save people from weakness and replace weak thoughts and fragile flesh with Hextech technology to minimize errors and losses that the “human” part caused. Only the trauma in the past caused him to gradually deviate from social norms.

Viktor considers himself a pioneer for the future of Valoran – a dream where humans reject flesh and bones in exchange for Hextech upgrades. It will free mankind from mistakes and pain, though Viktor knows this is an impossible task to be completed quickly and easily.

Created with the purpose of cleaning up Zaun’s garbage, but Blitzcrank himself evolved and became thoughtful, different from his friends. Built and developed by Victor, Blitzcrank has a desire to serve the people of Zaun by eliminating toxic substances.

Blitzcrank always believed that sacrifice and selflessness could bring the whole city to glory, he was not afraid of difficulty or poison. Just like that, he cleansed every passing place without fear.

Blitzcrank gradually overcomes the limit of a cleaning robot when he can sense the world around him and do good things without a robot being programmed to perform.

When a gas explosion destroyed the Davoran clock tower, he rescued their machinist family and their black-colored cat with a giant spinning arm – and carrying the small toy dancer in the bedroom of child.

Ivern has the heart of a disordered and disoriented person. Ivern wandered through the Runeterra forests, sowing seeds at every stop.

Previously, Ivern was a fierce warrior with a strong will and determination, but when he defeated each enemy at his feet and moved closer to revenge, Ivern made the wrong move to cut down the tree. Willow Spirit, symbol of Ionia. The mystical powers in Willow swallowed him, turning him into a half-tree and half-human reality. All the rage in Ivern dissipated, he was awakened and enlightened.

Now, Ivern goes everywhere and makes life flourish. He listens to every whisper of heaven. Ivern observes the creatures and offers help when needed. Every place Ivern comes, the forest grows in spring and the animals live together in harmony.

Finally, Ivern decided to leave the forest and travel outside the world and hoped to make up for what he had done. Although he knew it was not easy, he always challenged himself to accomplish that task before the sun disappeared.

Born in the aristocratic Crownguard family to protect Royal Demacian through generations. While his brother Garen joined the army when he was still a child, Lux was entrusted with guardianship of the family villa.

However for her this is an extremely boring job. Lux wanted to explore the world, and her optimism made everyone fall in love with a stubborn young lady who always loved life and innocence.

Then one day, Lux realized that the magic flowed in his body. She was shocked and desperate, because magic was a taboo in Demacia and magicians treated like felons. Lux is lonely and lost in his own house. Still, she secretly practiced to perfect her magic.

When she was sixteen, Agatha and Pieter is parents of Lux moved to their old home in Demacia City, to see Garen honored to join the army.

Lux was intrigued by the noble ideal of the kingdom, that every citizen inside was protected and cared for. Lux joined the Charity of the Enlightenment Church and helped the poor and sick every day. Lux understands that love and sacrifice are things that make this life better, and she aspires to make her home a fair, safe and progressive place where magicians like her are accepted.

One day, while assembling a prosthetic hand for a customer, Orianna heard about the terrible accident that happened in Zaun that caused the air to be contaminated, causing a series of painful deaths. Without hesitation, Orianna asked her father to come down to Zaun and use her skills to help people lessen the pain, but her father strongly opposed. He knew it was a risky and dangerous job, Orianna knew, but she was not afraid. Just before dawn, she argues with her father, carrying modern breathing machines and escaping to Zaun.

A few days later Orianna fell ill, and soon found it difficult to breathe in the middle of her home atmosphere. The breath was painful when her lungs were gradually destroyed, and she was forced to face her death.

But Corin refused to be helpless before his daughter’s death, using all of his money and machinery to replace Orianna’s damaged parts, returning her to a normal life. After several incidents, Orianna gradually perfected her body with her machine. And then when the father was dying, she gave father heart.

Now that she is completely a mechanical robot, Orianna is free to do what she likes, she leaves home, goes out into the vast world to devote more to humanity.

Zac is the product of a toxic chemical permeability leak and settles in an isolated cave deep beneath Zaun. The Zaun scientists wanted to turn Zac into a gladiator to serve their plots, but then, a couple of researchers tried to get Zac away from the project, bringing it to a remote area City and teach him how to behave as a human being.

Zac always responds to parents’ expectations, refuses bad behaviors, helps them treat people and repair machines. Zac often wandered around Zaun through a network of pipes or cracks in the stone floor, but often could not ignore the grievances, Zac used to protect those oppressed by thugs; leading to rumors spreading throughout Zaun. Rumors spread to the bad scientists, Zac’s parents were killed, and during the rage, he killed all evil enemies and knocked down dozens of neighboring houses.

When the anger passed, Zac regretted. It vowed to continue the good work parents did. It helped rebuild what had been devastated, but as soon as it was completed, it disappeared into Zaun’s vast pipeline network.