League of Legends: Releasing new champions constantly – The intent of Riot Games and its dangerous consequences 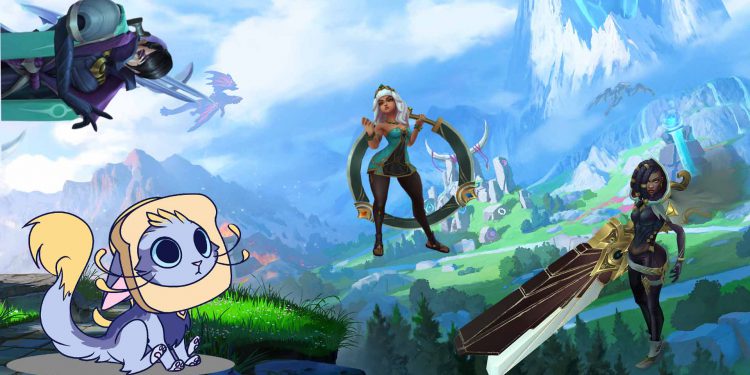 Sett will be released on the first version of the 2020 season, Patch 10.1, becoming the 149th champion of League of Legends. Is the launch of champions with such a dense and continuous frequency that part of Riot’s plan? But anyway, there are and will have consequences …

Senna – the little girl with a giant gun – just released not long ago and not yet out of hot on the Summoner Rift’s, next Aphelios – a champion with the ability to use up to 5 weapons different, and most recently Sett – a boss of Ionia.

With the arrival of Sett, the number of League of Legends champions has reached 149. Admittedly, Riot has been very productive in the past year, Riot Games preparing for his 10th birthday, conduct World Championship, prepare for the releases of a series of new games, then update the Client, the map… and the important job is to create new champions for the player.

In 2019, a total of 5 champions were released – not counting Sett because he have not yet officially appeared. The quality of this junior class is not inferior to the elders – even slightly better than before. Eye-catching visuals, vivid storylines, interesting skills and surprises – that’s what one can comment on recently released champions Riot. Sylas possesses the ultimate ability to “steal” the ultimate of any enemy champions desired. Yuumi is adorable with the ability to heal and poke very uncomfortably.  Qiyana. Senna – a gentle but also very resilient wife – is the first ADC + Supporting. And Aphelios – another Gunner – to be the first Champions of the Union to cause a headache for players when only need 3 skill keys for 5 weapons.

The release of many champions to suit a variety of players is of course to be done with every game similar to League of Legends. But the fact that Riot Games grew more and more thoroughly invested in the later champions must have been a cause, not merely because Riot had hired many better employees.

Recalling the day League of Legends releases, Riot faced a huge opponent: DOTA. Over the past 10 years, the gaming giant has been trying its best in every way to gradually pull its market share towards itself. The launch of a series of new champions with new varied and … weird gameplay – has also contributed to making players feel interesting and gradually turning their love to Riot.

Recently, Riot has even focused on the development of champions that can take on two parallel roles (rather than the Main – Secondary role as before): Sylas can be a powerful mage. , can both be a formidable assassin; and Senna is not only a gentle wife behind her husband, she can stand on her own feet and shoot bullets like a genuine long-sleeved champions.

The frequency of new League of Legends champions is about every 2-3 months. Every time a new champion is released, the community of players dedicates many articles, comments … to conjecture about the biography, gameplay and skills – even skin – of the upcoming champ lifetime. These posts have always captured a large number of followers and debates.

Is this an extremely sophisticated PR move of Riot to attract the attention of players around the world on their side?

However, does Riot take into account the consequences of creating so many things at once?

The creation of multiple champions for the purpose of diversifying the champion pool of League of Legends is a logical move of Riot. Each player has a style and a hobby. Pyke will be a champion not to be missed for those who want to do carry support. For those who love the interesting, Neeko with the ability to disguise into another champ will cause enemies to have a headache.

But perhaps it is the continuous release of these generals that makes them often bring bugs right after they have just stepped on SMNR. Recalling season 8 – the season of the virtual event – Zoe’s launch caused the entire Union community … to be so boiling, that the player had to create a global vote to ask Riot … to remove her off the list of champions. And Yuumi was immediately nerfed after 2 months of being released

Some champions are considered quite patchwork – there is no thorough investment, leading to an imbalance in the skill set. Senna is an example. Attacking the entire map with the width of the ultimate, as well as the ability to support Lucian and passive made her a bit too strong. Most likely Riot will have to nerf her again in the future. Qiyana is too difficult to play with the constant exchange of Elements to create mutations – which makes her a viable alternative to the assassin position, because not everyone can tame her this girl.

That drastic change will lead to a lot of consequences. Perennial players will gradually feel the excitement of the game diminish when there is no chance to predict the major changes in the future of the game, because there are … too many changes everyday. Those who play less with computer time will quickly get bored, because after a short time unable to study the meta of the game, they suddenly become a newbie because … don’t understand! Even regular players will lose interest in constantly changing play styles and adapting to new things in the game.

Regardless of what Riot’s intentions are, all that is happening is having a negative impact on the player’s experience. Hope Riot will soon see this and learn from experience as well as make adjustments in the near future, so that the title of Esports Awards 2019 is really given to the right owner.