League of Legends: Riot Games releases a feature to ban chat all gamers with the click of a button 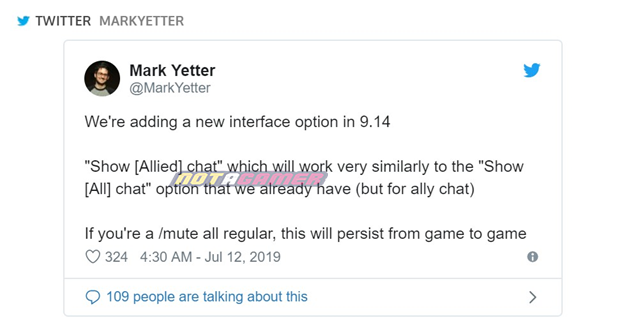 If you have at once played League of Legends, the constant verbal abuse from the beginning to the end of the game should familiar.

More and more gamers have such a big impact on the majority of players, and Riot Games has been forced to take part in the fight to avoid these unnecessary arguments.

Specifically, in version 9.14, LoL will have new features that allow players to choose whether to show allies chat or not, similar to the total chat feature already in the game.

“Show (Allied) chat”, which will works very similarly to the “Show [All] chat” optionand that we already have (but for ally chat)

Note that the above options will take effect in every LoL match (unless you turn them off) but do not disable conversation when the player is in the lounge (before and after the game).

Riot Games’ new addition is extremely useful for those who don’t like to chat. At that time, many people will focus more on the game instead of trying to break into the quarrels with allies / rivals.

The 9.14 update – with lots of content, power balance, special feature updates – is expected to be released later this month.

As soon as the new chat option is added to the official LoL server, all players will be asked to check the default settings to see if they want to mute allies / all.