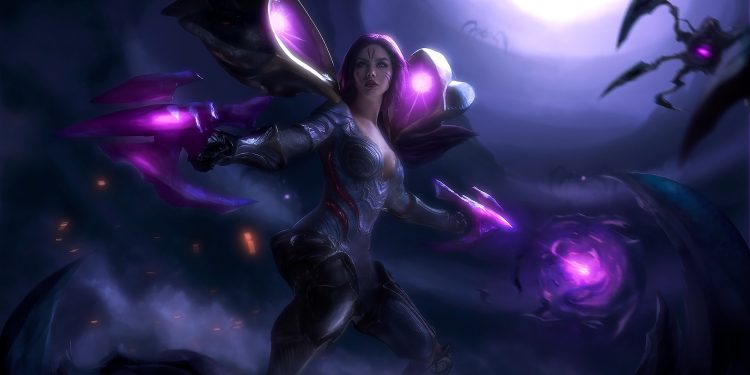 After having for yourself Two New Skin K / DA Prestige and IG, Riot Games continues to launch Kai’Sa the new outfit.

Recently, Riot Games has released a video reportage featuring the design of the Skin World Championship 2018 theme line to honor the team of Invictus Gaming champions. However, besides interesting stories revolving around the process of creating this series of costumes, what makes players LOL even more interesting is that a new outfit in the game is suddenly “exposed” unintentionally. at the end of the video.

Specifically, when turning to the scene of Riot Games creative staff completing the design of IG costumes, one of their computer screens is still displaying a 3D sketch of the new outfit, but through shaping can be confirmed almost certainly this is a costume of Kai’Sa, most likely Kai’sa Arcade.

Although Riot Games staff quickly moved to another tab, it was enough for the gamer community to discover, and immediately handed over interesting pictures of this new outfit.

Based on the characteristics  of two sets of engine (which can be considered wings), this is definitely a costume belonging to Kai’Sa – the ADC General has just been released a year ago and now It is still popular in the Arena of Justice and the costume of the Arcade Universe.

Even these images demonstrate one thing that Kai’Sa Arcade costumes are almost completed and will soon be released soon. It seems that after Lux, Kai’Sa has become the next name to become the “darling” of Riot Games, when this girl has possessed herself to three “stunning” clothes, K/DA Kai’Sa, K/DA Kai’Sa Prestige, IG Kai’Sa, and currently coming out with their fourth outfit promises to be hot as well. (That’s not to mention the costume that comes with the launch event – Kai’Sa Bullet Angel are also highly appreciated for quality).