League of Legends: The Reason Behind Jinx’s Flat Chest, Ekko Used to Have a Crush on Jinx and More Facts You Might Not Know about Her 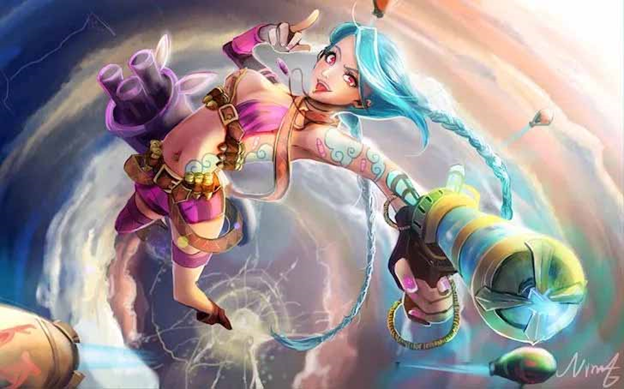 Jinx, the erratic temperamental criminal from Zaun, lives to wreak havoc without minding the consequences. Carrying a deadly armament, she unleashed the most dazzling explosions, leaving behind a long chain of chaos behind. Jinx hates boredom and enjoys taking on her own distinctive desolation in every place she visits.

Here are interesting facts about Jinx that few people know, Shared by a Group League of Legends in Vietnam

9. Jinx is the first champion whose animation always smiles at every skin wallpaper.

10. Jinx’s hair formed a heart shape when she died.

11. The hidden mission appears when the enemy is Vi, Caitlyn (or both) and vice versa.

14. The Jinx designer is Psycho Arsenal.

15. Jinx was inspired by the Joker, Gollum from the Lord of the Rings and Helena Bonham Carter.

16. Jinx is a Zaunite criminal who is devastating Piltover ‘for fun’ and to provoke Vi.

18. The background behind Jinx is Vi’s original version but devastated.

19. In the beginning, the minigun was named Mr. Pew-Pew and has a cat face painted on it.

20. Mafia Miss Fortune and Twitch appear in the Mafia Jinx skin wallpaper. Along with the green cards of TF.

21. The original concept of the Jinx Slayer skin was that the doomsday real world and Jinx were the survivors. But the designers changed the idea to a zombie killer because it suited her personality better. When talking about the Zombie Slayer topic, Jinx was the first champion to think about this topic.

23. Star Guardian Jinx’s pet is Shiro and Kuro. The embodiment of Jinx’s ferocity and trouble.

26. Jinx always wanted to hug Ziggs but he was quite scared of her.

27. Jinx believes that Ziggs is a product of her imagination, more specifically her conscience.

28. She’s small chested because the community at the time was teasing riot about only making large breasted women.