League of Legends: The unexpected truth about Zed, just because of worshiping the wrong person but becomes an evil person 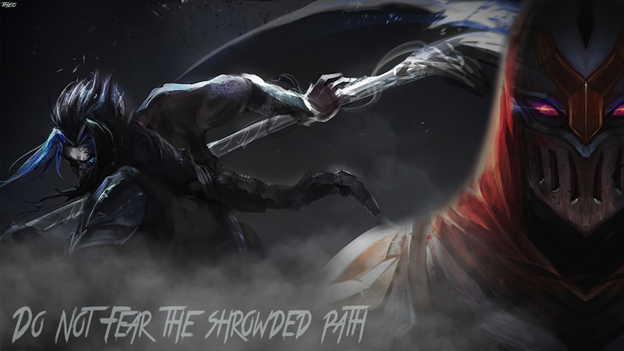 The stories about Zed always make people think he is a bad guy. But in fact Zed has great goals, just different from Kinkou.

A child adopted by Kusho, Zed has shown his excellence in the Kinkou Society. However, he could not overcome Shen – the son of Kusho.

Zed is not inferior to the skill, but Shen has a balance of emotions, while Zed lacks this balance. The relationship between Zed and Shen is not completely a rival. On the contrary, they are as close as brothers and always help each other.

Years later, Ionia appeared monsters that took the lives of many innocent people. Three people must secretly kill this demon. After four years, they caught the monster. The fact that many people are surprised by this demon is just a small stage builder in the troupe with the name Jhin.

This is a turning point in Zed’s life. Zed himself wants to kill the monster to eliminate the danger, but Master Kusho discourages and sends Jhin into prison.

From there, Zed began to show indignation.

The frightening deaths that Jhin caused haunted Zed. It growing when Noxus began invading Ionia but the Shen and Master Kusho were interested in the “balanced” ideal. With the thought of wanting to punish evil, Zed broke into the power under him and was covered by darkness after opening the dark box. Since then, Zed has completely changed. He showed a contempt for the weak and hated the “balance” from Great Master and Shen.

The culmination of the incident was when Grand Master refused to help the people of Ionia against the invasion, even though Zed had pleaded.

Enraged by that balanced idea, Zed decided to leave, gathering the warriors against the Noxus invaders. Any threat that exists with Ionia is destroyed by Zed’s army.

Later on, maybe you all know Zed and the Shadow Association destroy the master to take away the dark black box. The Kinkou Association was wiped out, replaced by Zed and the black method practitioners. His Shadow Festival intervened in the battle between Ionia and Noxus and repelled the enemy after the massacre near the Epool River.

After this battle, Zed has acquired a new disciple, who later becomes a cold-blooded assassin no less than Zed, Kayn.

In fact, Zed’s principle and his Shadow Association prevent anything that would endanger Ionia. It is in stark contrast to the “balanced” ideal, leaving the homeland when invaded by Kusho and the Kinkou Association. Zed’s nature is not bad. The things he does are not bad guys. Because of his ideal of protecting his homeland, he was willing to trade everything. Is it the Great Master Kusho, Shen, Akali or Kennen that pursue balance?