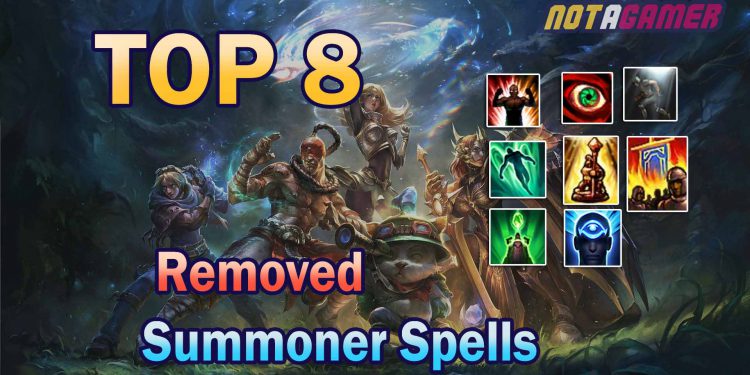 Summoner spells are one core mechanic that separates League of Legends from most other MOBAs. There are many summoner spells that were removed throughout the years.

Summoner spells are chosen in Champion Select before the start of the game. Each player is allowed two summoner spells chosen from a list. Summoner Spells can be used in-game to aid a player’s champion in various ways as each spell has a unique effect.

Here is the Top 9 League of Legends’ Removed Summoner Spells since 2010.

The first of the list – Clairvoyance is a summoner spell that reveals a small area of the map for your team for 5 seconds.

Even though this spell got removed in Season 2015, Riot Games turns this into the Scrying Orbs, then Farsight Alteration/ Farsight Ward later.

Fortify grants invulnerability to all allied turrets and causes them to attack 100% faster for 7 seconds. While Fortify is ready to cast, you deal 9 bonus damage to minions.

Stifle was released in 2010 and got removed in the same year. This unique summoner spell silences a target enemy champion for 3 seconds and removes any beneficial buffs they have.

This summoner spell was extremely good against assassins as a Support or AD Carry back in 2010.

Surge empowers your champion, increasing ability power by 10 − 78 (based on level) and attack speed by 35% for 12 seconds.

Urdy would be the best champion to use this summoner spell. Unfortunately, similar to Stifle (2010), Surge was released in 2011 but got removed in the same year.

Remember the good old days when there were Banner of Command and Promote. Promote was one of the best spells to use doesn’t matter if you are ahead or behind the game.

Just like its name, Promote promotes the nearest allied Siege Minion (in Classic) or super minion (in Dominion) to an anti-Turret Cannon, healing it, granting bonus stats (depending on level), and causing it to grant the caster gold for its kills.

You are a truly loyal League player if you know or have used this summoner spell.

Revive instantly revives your champion at your team’s Summoner Platform and grants 125% movement speed increase which decays over 12 seconds.

Would you bring back any of these summoner spells? If yes, then which one?

Infomation From : Stole my Pyke