League of Legends: Two Darkin have finally begun to show up? 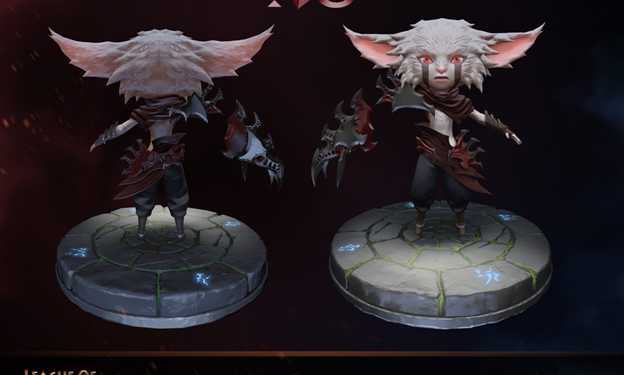 As usual, the identity of the new Riot Games champions is skillfully revealed and this time after champion Darkin 4th female will be the 5th Darkin.

Darkin is one of the most popular characters of the League of Legends because the generals representing this race own a huge fan base. It is not too difficult to understand why Darkin is so famous, when they are the embodiment of rage and darkness – The qualities always bring a wonderful and fascinating beauty.

According to the story of the League of Legends, there are all 5 strongest Darkin left in the world after the Darkin War but all have been sealed.

Up to now, 3 Darkin have appeared, including Aatrox, Varus and Kayn. The identities of the other two Darkin have thus become a great puzzle and attracted the curiosity of many gamer.

Riot Games has released a short story called Dark Dark Kin, directly related to the Darkin tribe, specifically reporting Varus’s journey after the name Darkin occupying the corpses of the hunter couple Valmar and Kai to escape the seal, and are on their way to find their lost brothers

In this vast Runtera world still exists 5, three of which have appeared including Aatrox, Kayn, Varus and now we have a few information about the remaining 2 darkin

The fourth Darkin is Varus’ sister, who is mentioned in a Varus line in the new storyline

Varus sighed, saying, “Where are you, sister?”

With only a short detail, we can conclude that this is definitely a new female champion and one of the remaining 5 Darkin, because Aatrox was last seen in the Freljord. While Kayn is still in Ionia, there is no connection with Shurima, and they are all defined as men, so it cannot be the name Varus mentioned.

Talking about the identity of Darkin, many theories suggest that this is most likely a female assassin in the middle. Since 3 Darkin appeared, Aatrox was often linked to Top’s main role, Kayn was Jung while Varus was a genuine ADC, About 5 Darkin made many gamers think of a complete demon squad and if Riot built The character follows this direction, leaving only two positions, Middle Road and Support.

Varus’s sister at the intersection of light and darkness is the embodiment of “one-sided balance of light and darkness” has the ability to control “blockade recovery and items”. She and her companions were sealed by the power of the Queen of the Sublimation Squad and the owner of the Cross of the Sword

Followed by the identity of Darkin 5th, here are some pictures of Fanart about The Darkin Yordle – by Kevin A Silva Although not the official information of Riot Games, but it is enough to make us excited and looking forward to this champion