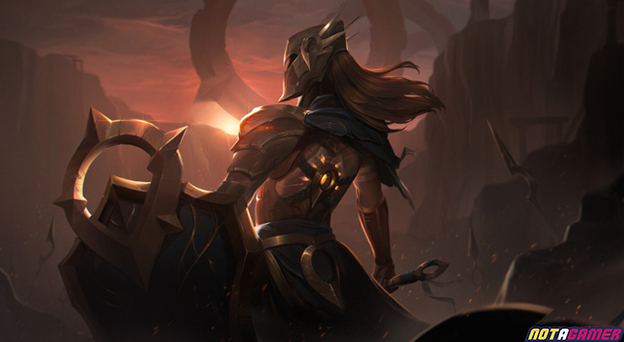 Although it is just splash-art images, the player-designed Leona Rework has received very positive feedback.

After Pantheon was rework, although the strength in the League of Legends has not improved much (because players it is still in the process of learning a new gameplay), but aesthetically, Pantheon is one of the works the most successful art Riot ever created.

From the storyline to the creation of a war god, all players love it. And when it comes to Pantheon, the gaming community can’t ignore Leona – Pantheon’s former friend in the old plot.

After the rework, the story of Pantheon has been changed to make them enemies, Pantheon has an enemy relationship with Leona because of hatred Solari, but the Pantheon couple – Leona is still supported by players.

Therefore, although Leona’s play is still good, the champion’s appearance is no longer suitable when placed next to Pantheon. Not letting the community wait long, artist Vincent Tran has released Leona Rework and is rated by the gaming community as a quality work.

Splash-art of Leona Rework fan-art version. It is easy to see that this work is in the same tone as the new Pantheon, and Leona also wears a hat that covers her face to resemble Pantheon.

Although viewed from behind, many gamers claim that Leona in this work will definitely be very sexy, as she shows off her bare back with the symbol of the Solari.

Soon after witnessing this work, many gamers also called on Riot Games to plan to edit the appearance for Leona, because in reality, this champions has also debuted for a long time but she appearance does not change ?

Although not too outdated, if compared to recent remakes, Leona’s shaping has also become obsolete. However, Leona is still lucky because she possesses a lot of beautiful skins, typically two real Lunar Eclipse / Solar Eclipse skins.