League of Legends: What if Riot Games remove the Runes Reforged? 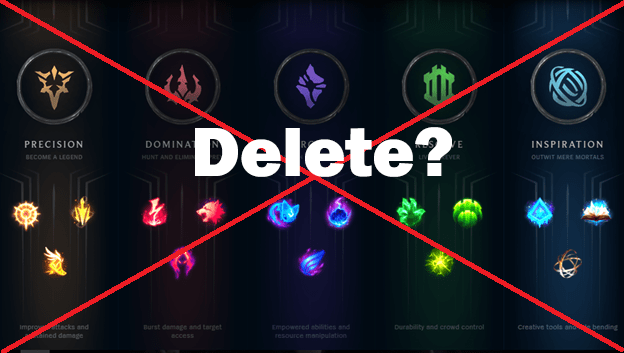 A few ideas that the removal of Runes Reforged (RR) will bring balance to League of Legends. In a match, the deciding factor for victory is now just the champions, items and skills of the player. So should or should not remove the RR?

If Conqueror is removed from the game, we will not be too abusive.

Removing RR will also remove the dominance of the assassin champions with Dark Harvest. Lux Aftershock or Ahri Glacial Augment will no longer annoy you.

Champions like Jhin or Caitlyn will not be able to abuse Fleet Footwork to compensate for their mobility weaknesses. Vayne will no longer be strong in the middle and late game with Press the Attack.

In addition, there are also ideas that the removal of RR can bring more creativity to the player, instead of just following these available Runes.

Others seem to disagree with this one. Removing Runes may make the game more balanced, but for players, it probably does not necessarily do that.

Removing an Runes Reforged partially makes League of Legends less attractive. Simply because building RR will make players more happy for preparing for a gameplay that they thought of.

Player’s skills are always the deciding factor of a match, but building a RR will partly help players limit that. This is really what makes the game more balanced.

Although there are advantages and disadvantages, but the removal RR at the present time is not so necessary. Maybe it will partly help balance the game but will also make the game boring. Perhaps it would be better if this was played by more players.