League of Legends: What Champions Should You Play to Match Your Zodiac Sign? 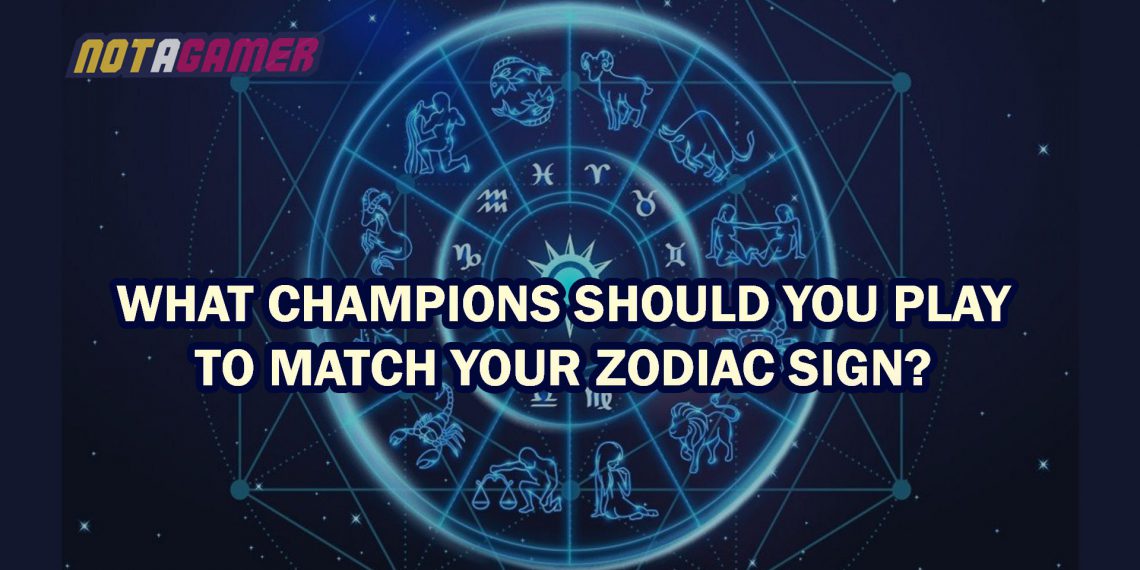 Aries is one of the most mature and serious Zodiacs. Aries are the people who have the righteous and true personality in life.

With the aforementioned personality, the Aries should be the jungle or the main team call leader in the top lane.

The champions you choose should be the ones with certain strength, resilience, and aggression like Darius, Garen, and Xin Zhao. These are the champions with the plot, along with a strong play that suits the Aries bow.

Although Taurus is shaped like a buffalo, the zodiac people are often introverts, soft-hearted and honest.

Usually, the Taurus judged to be quite quiet and did not often express their feelings to their teammates. Not only that, but they also tend to like to work hard alone in the top lane.

Speaking of which, you probably guessed those hardworking, quiet people like Taurus that are suitable for any champions, right?

It is none other than the top lane champions who work hard in the early stages and carry teams in the later stages. For example, Nasus, Gankplank, Kayle in the top lane are the most suitable for the Taurus in League of Legends.

The next Constellation is the Gemini with two twin women. Gemini people are often considered to be very “autistic” and humorous, they are often those who like to operate alone as well as unleash their own play.

With such a spirit, gamers of the Gemini should be the jungle operating independently, with the killer nature of flesh-eating.

Besides, the most suitable champions for this personality group is Shaco and Wukong. These are not only two champions suitable for the twin form of Gemini but also have a very creative and diverse set of jungle skills.

If you do not choose to go to the jungle, you can also choose Zed as your main champion and unleash chaos in the mid lane.

The fourth palace among the Zodiacs – Cancer, famous for its richness of sacrifice and honesty. They are people who are willing to sacrifice themselves for their teammates and are always dedicated to helping teammates when needed, even sacrificing their own interests.

With such an honest and noble character, there is no better place for Cancer than the position to support. Soraka takes some of his blood to heal his teammates or Lulu and Janna always protects everyone who is the most suitable champion for Cancer. Although you have to sacrifice so much, for a victory, it is worth you.

As the name of the beast is extremely powerful – the Lion is the Zodiac with strong, assertive and very “Fairplay”. The Lion is also famous for his generosity and is very mean to his friends.

However, for the enemy, they become a very dangerous opponent when they can crush the lane with strong champions and easily escape in tight situations.

For Lion, the most suitable position is definitely no other than the top lane and there is no more suitable champion than Renekton, AAtrox or Akali.

With the quality of the champions, you will be a heavy machine and will carry the team on your shoulders. Besides, don’t forget to show your respect for friends by appearing in combat with Teleport!

Despite their cold appearance, the Virgo are good people who like to worry about their teammates. They are often insecure about the strangers they meet and don’t trust people often.

With an introverted and perfectionistic personality, the control jungle position will be more suitable for you than anyone. In the jungle, you will unleash yourself, apply your wisdom in controlling and helping your teammates whenever possible.

A champion that is suitable for Virgo should be a jungle capable of traveling over terrain and prefer to control remote support like Sejuani, and Zac.

Basically, Libra was named the fairest and most gentle of the zodiac. They possess the elegant appearance and superior talent but hate it alone and always want a companion.

This is the character of the top people or the support they need, they will not care about the praise for themselves but will do everything possible to make the ADC or teammate.

With such a personality, the two champions have the ability to protect wholeheartedly because teammates like Shen and Galio will be great champions so you can side with the people you trust.

If you want a champion in the meta, Clarias Tahm Kench is a great choice for you.

Of the 12 constellations, Scorpio gamers are one of the most feared unknowns, as they always appear in the most elusive shape possible. They often hide behind a perfect cover to deceive the opponent.

Although the zodiac’s hatred is often a question mark, one thing is for sure, they are tough and are not easy to forgive. With such a character, the magical creature Evelynn is a champion could not be more suitable for Scorpions.

In addition to the champions like Zed and Leblanc, are also very strong assassins so you can torture to lure the opponent throughout the match.

A zodiac who likes to roam, Sagittarius is often a lover of beauty and likes exploration. They cannot tolerate being bound to boundaries and like to work the way they want.

Besides, they are often talkative people, like traveling with friends and digging flowers.

Another constellation that prefers to be alone is Capricorn. They are known for their thinking and prefer independent lanes. As a gamer, those born in January often take care of their teammates and show good leadership when assigned important tasks.

However, they are cold and unapproachable and possess the appearance of an adult. This is a constellation that is very suitable for the mid lane position with the champions that are more tactical and reversible in combat as Orianna or Twisted Fate.

So Capricorn gamers should focus on showing the leadership of the natural crowd and don’t waste it!

Aquarius is like Sagittarius as the constellation of impulsive, impulsive. Aquarius gamers are usually creative but they are also quite toxic. However, if any strategy is proposed, they will be the ones who pursue it to the end.

With such a diverse set of personality chains, Aquarius fits and adapts to every location on the map. However, the most suitable is the Support to fight and resist as Leona, Thresh, Pyke.

But consider whether you are suitable for the ADC because if you miss the rhythm, your bottom line will surely be crushed, resulting in a losing match.

The constellation is finally similar to Libra which is fearful loneliness and very sensitive, holy. Pisces gamers are often dreamers but possess a very sensitive sixth sense.

This is a great thing if you can combine with an exemplary support model like Libra.

The best champion for Pisces will be ADC champions like Jinx or Xayah, Tristana. If you can find the real love or best support of Libra to duo in rank, you will become a force and victory.