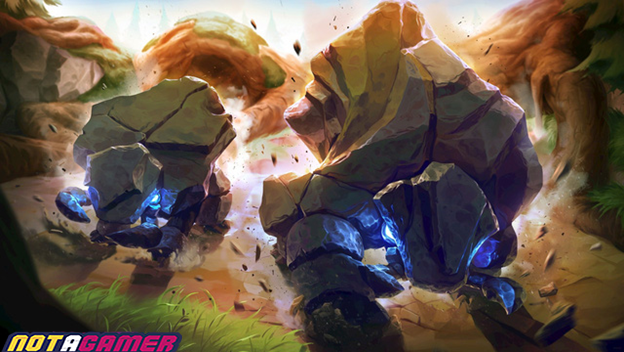 There are times when you see your team’s Jungle being killed by a monster, because they’re actually quite dangerous than you think. For gamers Jungle, perhaps farming the monster grounds is too simple, even many people “despise” the monsters that appear in the Summoner’s Rift.

However, many times you will have to “swallow bitterly” because suddenly realized monster are too strong, even have to recall to heal and then return to fight.

These two monsters have equal amounts of blood and damage. Including 2100HP and attack power 82.

This toad is also quite strong when he possesses 1800 HP and 70 damage.

However, it is quite painful to have 3 wolf bite at the same time.

So the total damage of the Crimson Raptor and Raptor is up to 85.

Thus, according to the blood and damage caused by each Jung monster, we see Krug and the bird quite uncomfortable. Although the Blue Sentinel and Red Brambleback seem to be powerful, they are often helped by comrades so it is easy to eat.

For champion who are slow, hitting Crimson Raptor and hitting Krug should be very careful.

So if you are new to Jungle play, consider Red > Crimson Raptor > Wolf > Blue Sentinels> Gromp > Krug > Gank. Such Jung will save a lot more blood, avoiding the constant recall that will create a loss of experience compared to those Jungle on the other side.

Of course, Jungle will still have a lot of work to do, but accurate calculations will help you get more advantages.