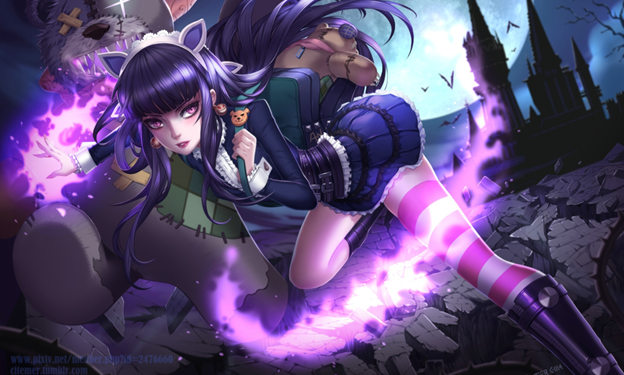 In the League of Legends, many generals carry their “pets”.

Quinn and Valor had a fateful relationship with each other, when Quinn fell into helplessness with the last arrow, an eagle plunged to attack the monster’s face.

With the help of the eagle, Quinn was able to defeat the monster when she took all his courage and calmly aimed at the last arrow on it monster.

After that, Quinn took the eagle home to take care of and named Valor. From there, they became a couple together on any battle. Valor has a hard beak and sharp claws ready to attack any enemy and this seems to be an indispensable “friend” of Quinn every time she goes to battle.

Referring to Malzahar, every player must be scared by the amount of damage from Void Swarm of Malzahar.

Void Swarm of Malzahar is known as small monsters, they can erode everything that blocks the way, including humans, trees or houses.

As long as Malzahar orders, these bugs are ready to attack the enemy without fear or run.

3. Mist Walkers – Maiden of the Mist of Yorick

Mist Walkers, weak but always obey Yorick’s orders. They attack the enemy while Yorick and the Maiden of the Mist launch finishing blows in an instant.

Crows are a symbol of death. Swain uses crows to collect the victim’s soul to restore and nourish his vitality.

Swain’s crow doesn’t actually appear in the game and deals damage, but it makes Swain scary.

Lastly, Tibbers of Annie, a huge and extremely powerful bear ready to be launched to fight. “Big but don’t know if the penis is big :l”

Annie’s advantage in every battle was not herself but in the power of this bear.

Tibbers eradicated all those who got in the way with his powerful slap and burned everything with Annie’s fire of resentment.

In your opinion, which of the Pet is the coolest? Please leave your comments under this article!