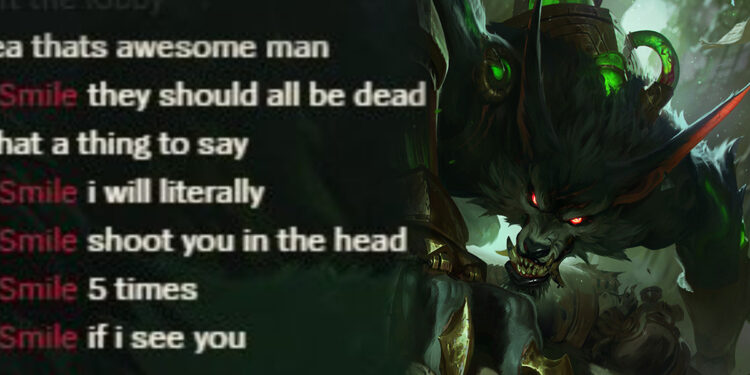 A League of Legends streamer and Warwick OTP was recently got perma-banned on his main account after going on an outburst after finishing a match.

After going on a rage in a post-game lobby on July 28, the LoL streamer and YouTuber Parnellyx had his main account, which was just a few games away from Challenger, permanently banned.

Parnellyx got banned because of life-threatening

League of Legends has a reputation for bringing out the inner rage of every player. Since its debut, the game has experienced continuous issues with toxicity among its user base. Even for Parnellyx, who is very much an exceptional Warwick player and widely known for his gameplay on his Twitch and Youtube channel in the League community.

On July 28, Parnellyx stated that his main account has been permabanned. Tenacity, a 100 Thieves player, reacted with proof as to why Parnelly’s account was suspended.

The rage, which was captured in the chat after a game has been finished, showed Parnellyx threatening, “There truly needs to be a mass shooting at one of these League events. No sympathy for anyone in this community.”

“They should all be dead. I will literally shoot you in the head 5 times if I see you.”

Perhaps he was flaming his teammate in the match and turned out everything didn’t go as planned that resulted in his team losing the match. Nonetheless, his word was way out of context for Riot to expect, and his account was quickly disabled indefinitely.

After that, Parnellyx later apologized on Twitter, writing: “I do not want to ever be perceived as a toxic player or “L9”. I look up to people like Riste or Voyboy. I do not know what is wrong with me but league makes me the complete opposite of who I am”.

After being mentioned in the Twitt, Voyboy himself turned against Parnellyx’s statement, saying “honestly, that was one of the most f**ked up things I’ve ever seen”.

Finally, Parnellyx announced on his YouTube account that he will be taking a break from streaming and video creation.