Leaked: Bel’Veth – The new Void Jungler in League of Legends 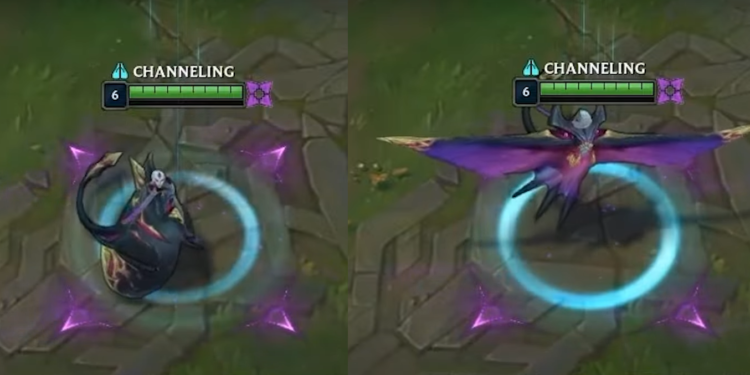 The Lavender Sea Empress – Bel’Veth ingame appearance has been leaked.

Are you ready for Bel’Veth – The Lavender Sea Empress of the Void?

Following weeks of teasing and conjecture, League of Legends fans may have gotten a first look at the next Void-based skirmishing champion going to Summoner’s Rift via social media leaks. Ryscu, a League of Legends content creator, published a video showcasing the champion’s probable in-game appearance as well as her potential name: Bel’Veth.

Bel’Veth appears in the video as a manta ray-like monster, colored in the familiar-yet-ominous purple of the Void. She also has two forms, the first of which is a humanoid head with broad fins and a swinging tail. When she unleashes her ultimate power, however, she entirely morphs, transforming her humanoid head into a gigantic horned monster.

Viewers may also hear a handful of potential in-game remarks from her that follow the same tone as the teasers, with her saying, “every morsel of this world will fuel our metamorphosis.” Throughout Riot’s different Champion Roadmaps and developer videos, the new Void jungler is said to be coming to make the world submit to her will.

“Those who do so willingly will be rewarded by becoming part of the ever-expanding Lavender Sea, crashing like waves against the enemies’ defensive structures,” the devs said in the most recent Champion Roadmap. “Give in to your Empress and let her feed on your essence, so you may become part of the new evolution of Runeterra.”

It’s unknown how Bel’Veth is related to other void champions like Rek’Sai or Vel’Koz, but her rank as an empress certainly makes her their ruler. Other than this leaked metamorphosis as part of her ultimate, it’s also unclear what her skills are and how they’ll operate.

Riot Games has yet to clarify whether Bel’Veth will be the aforementioned Empress of the Void jungler who will be released as the next champion. The video featuring Bel’Veth may not be official League content that will be released in the future.

Moreover, after the leak video become popular all over the internet, some fans in the League community has found out that Bel’Veth may have been hinted since… 2016! More particularly, Bel’Veth can be seen in both Battlecast Vel’Koz’s splash art and in Battlecast Viktor’s recall animation.

She is also rumored to be joining the Arcade cosmetic universe as a Battle Boss villain, pitting herself against the world’s heroes. It would make sense for her to join the baddies, given that she is swiftly being positioned in the legend as the next major villain of Runeterra. Her appearance might possibly indicate that a Void-related event is on the horizon, as Kassadin just received a visual change, and a short narrative starring Kai’Sa, Taliyah, and the Void was released a while ago and was even included in the teaser for League’s 2022 season.

Riot has not confirmed the validity of these leaks. Riot, on the other hand, claims that “the Champions Team has something coming soon.”