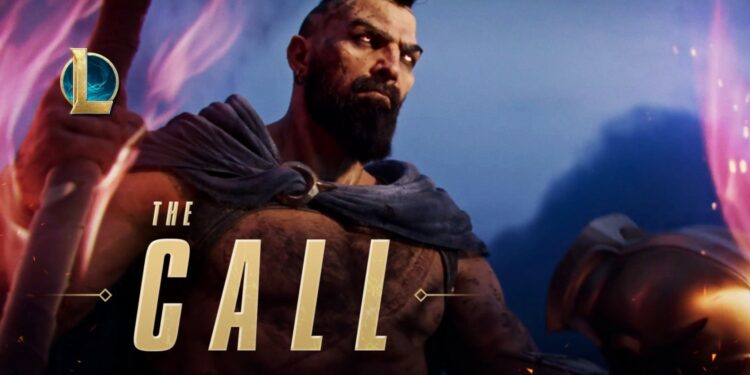 Riot Games’ Youtube account has released a new season 12 Pantheon cinematic. The cinematic will be the Season 12 ranked cinematic, similar to previous years’ “The Climb,” “Ruination,” and “Awaken” cinematics, which precedes the start of a new season. On January 7, at 7 p.m the video will be released. These cinematic often feature champions from many regions fighting various opponents.

The thumbnail portrays Atreus, the Aspect of War selected by the Pantheon. Pantheon, the heavenly god of war, possessed the mortal man Atreus before being murdered by Aatrox, according to league’s lore. Atreus survives and now wields his heavenly strength as he struggles to protect Runeterra.

Riot has teased it via tweets, depicting champions who will feature in the cinematic. Ornn is the only champion that has been teased so far, but considering his recent inclusion in a narrative about Sejuani, Riot may be bringing them into the scene too.

The void has received a lot of attention in recent League of Legends short stories, with different storylines for Malzahar and another hinting at a Void invasion of Shurima. Pantheon might be another hint towards the next Void jungler revealed in Riot’s 2021 Champion Roadmap.

Pantheon’s, or Atreus’, lore has been preparing him to safeguard Runeterra from an evil entity bent on annihilating the Earth. This has been speculated to represent the Void’s return to Runeterra, which would correspond to the sudden attention on the Void. Riot might even employ the cinematic to show Pantheon fighting with the new Void jungler or another being from the void. This might possibly be a twist on “the call of the void.”

The new jungler has been proven to be a void creation that feeds on experience, memories, and the energy of human existence. It will be the third new champion to be introduced this year, following an ADC and Support champion.