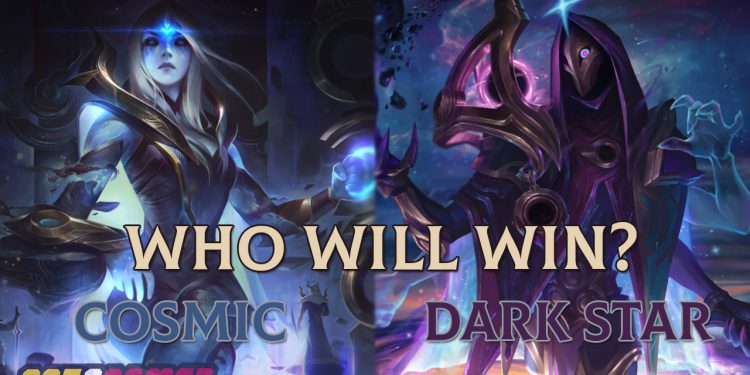 The PBE has been updated! As we start the 10.5 PBE cycle, today’s patch includes four new skins, including Blackfrost Alistar, Rek’Sai, and Renekton, Hextech Sejuani, new chroma, icon, and a lot of changes for game experience !

Besides being busy with countless changes for version 10. 5 is operated on the PBE server, recently, Riot Games has put on the store of the PBE server an extremely mysterious impressive symbol  and many players think it is related to one of the 2020 events . This icon caught attention with its two sided aspect, but Nobody can really pinpoint to what it is leading to: A skin? Skins? An event? All of these?

The icon above is named Light’s End and is posted with the status line “Infinity calls”. This status lead players to an Runeterra’s non-Thanos Infinity War version. Along with the symbol that contains images of two champions with typical tones of the Cosmic and Dark Star universes, that made the community talk and anticipate this to be the method Riot Games flirt for the 2020 Arena Event.

With the left half, based on the lips, we can determine this is a female champion.  In addition, a female wearing a “hat” to cover her eyes is none other than Lissandra.

Since obtaining the Coven Lissandra in 2018, she has also been a member of the “needy of love” association of Riot Games for a long time but still no new skin.

The other half, with the characteristic red color of Dark Star, incorporates close eyes and sharp motifs like “spider legs” close to the head.

Sharp patterns like “spider legs” on the head?  Elise is the only champion with this pattern at the beginning of League of Legends (Too Easy Riot, I need better easter eggs, please!).  In addition, since Elise had the Super Galaxy costume in 2017, she has also not had a new outfit yet.

Since both of the “mysterious” characters in the icon are still unconfirmed by Riot Games, it is perfectly normal to have more ideas.

But it is really exciting for a battle between two great Entity as know as the most favored Universes Skins in League of Legends, the 11th for Dark Star vs the 8th of Cosmic. And don’t forget about Riot’s main profession-The Movies.

In your opinion, what are the 2 “mysterious people”?  Is there any chance that Riot Games will play and create two more versions of skins for Lux? Please leave your opinion in the comment section!