Lillia can full clear leashless with full HP and one Smite left by the time Scuttle spawns (10.15) 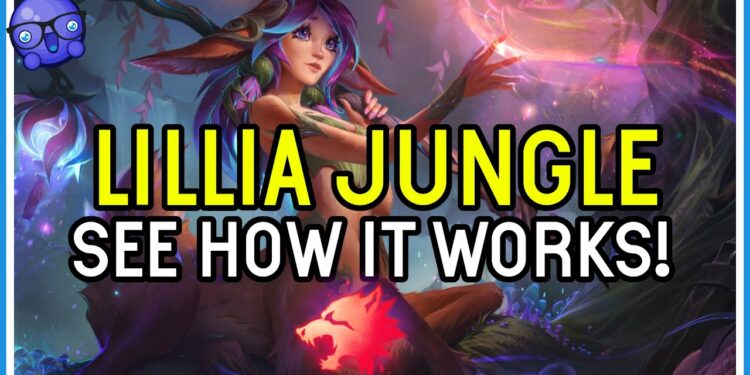 Let’s break down your initial clear, which is going to be very important to get you going. Lillia actually has one of the healthiest clears in the game. This is mostly possible for 2 reasons that you’ll need to keep in mind.

1. Lillia’s 325 attack range. She’s not quite a full-fledged ranged champion, but she definitely has much higher range than most melee characters.

2. Her passive movement speed from her Q. Combine both these traits and you have  a camp kiting machine, who excels at clearing her jungle. Unfortunately for all the Udyr mains out there, this does mean that you’ll need proper jungling mechanics to play her. She absolutely can’t stand still, while clearing her jungle.

Unfortunately, her strengths here are also a bit of a weakness. Lilia will struggle with clearing both Red and Gromp early on. Gromp is obviously a ranged camp, so you can’t really kite it. and Red buff is randomly a fast boy, who happens to catch up to her faster than every other camp, so there’s not much kiting to be done there.

So regardless of what route you do, only do these 2 camps if you have a smite charge available, so you can burst them as quickly as possible.  Start red, if your leash sucks, or you get no leash, smite it. As we said, it’s one of the worst camps for her to do.

Then here’s a trick for you : move to Raptors lair while doing the red buffs, trying to hit all of them by your Q and then slowly kitting the Red buff back to its lair. It called the “raptor trick”, which was used by some other junglers like Amumu or Ekko. By doing this trick, you would get 180 HP regained over the course of 5 seconds as the Hunters talisman applies a damage over time for 5 seconds, and restores 6 health per second per monster hit with abilities.

Then do Krugs. Lilia gets movement speed whenever she hits an ability on an enemy. Try to finish camps off with a Q, so that you retain your movement speed as long as possible while moving from camp to camp. Then do raptors, wolves, and blue. You should only have to use 1 potion to end this route with full HP. You’ll get to scuttle right when it’s spawning, take it for level 4, and from this point you can go to either top or mid and gank with full passive stacks, very likely catching players off guard by how fast you are.

There is the opposite route, where you do Blue, wolves, raptors, then red where you’ll use your smite charge, and then into krugs. This route is slightly weaker, because Lillia does lose most of your passive stacks going from Krugs to Scuttle, but the route is still fine. Obviously with both routes we’re avoiding Gromp. Not that you can’t do Gromp, but it will cost you a lot of health doing it. Most of the time, it should be the one camp you avoid during your initial clear. We mentioned earlier that Lilia has problems dealing with mid-range champions who can either burst or lock her down.