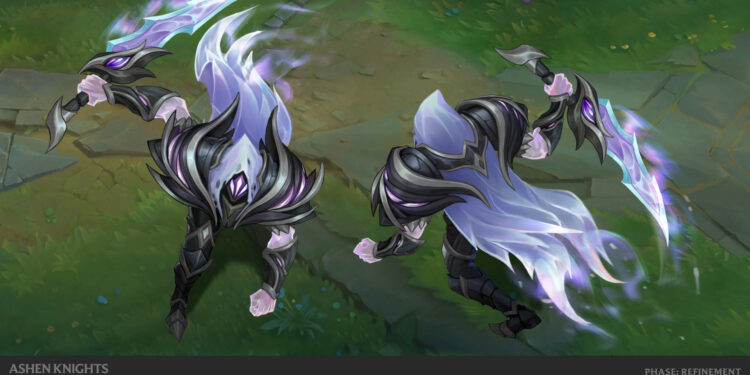 According to the opening livestream for season 2022, and a detailed dev blog posted recently, Riot is considering the accessibility of Mythic skins, the rarest tier of skins. Many of these may only be obtained using Gemstones or Prestige Points, both of which are set to be phased out in favor of a new currency called Mythic Essence.

Mythic Essence will be obtained in the same manner as Gemstones and Prestige Points, through Hextech chests, purchasing, and event passes. They’ll also be available via new Masterwork and Showcase milestones, which will award gifts based on the number of Masterwork chests and event capsules a player has unlocked.

When Mythic Essence is released, the Prestige Points will be taken out of the game, with only Gemstones in players’ being changed into Mythic Essence (1-to-10 ratio).

After the Mythic Essence shop is online, Mythic skins will be removed from all loot pools, including rerolls, making direct purchases from the shop being the only way to get them.

For the first time, Prestige skins from 2018-2019 will also have an update. New revisions of these skins, showing them in even more gleaming beauty, will be offered to players who already own the original versions, which are not available to others in any other way.

Seasonal Mythic skins will be released throughout the year, expanding the Mythic category beyond Prestige, Hextech, and limited-time skins. Riot released the Ashen Knights skin collection, as well as a new Pyke skin, as one of the new thematics.

According to the dev blog post, these will be divided into 3 different phases. However, no official released date has yet to be announce for all 3 of them. Players should keep an eye for any news from the dev team.