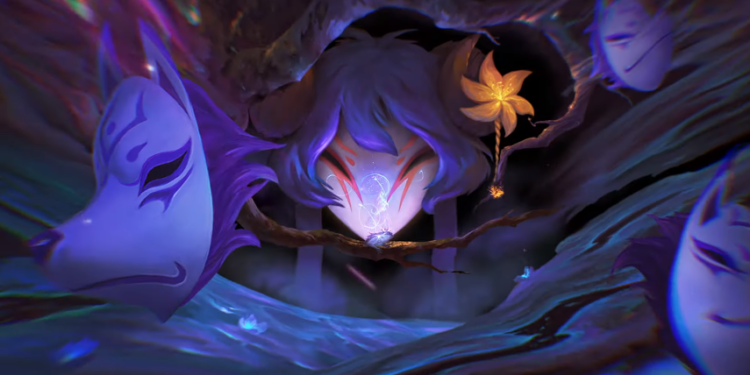 Riot announced they would release 120 new skins in 2020. So far it’s not enough, after seeing the revealed of the completely new skin universe Spirit Blossoms. We have a theory that Ahri, Yone, Kindred, and Lillia will end up receiving a new skin.

Recently, at Online Anime Expo Lite, during a panel on the ‘History of Skin Thematics in LoL’, in which the studio talked about the game’s anime-style cosmetic offerings. In the end, Riot shared a teaser for the new alternate universe – Spirit Blossoms. We can not watch that clip again now because it’s now set to private but Riot influencer manager Mel Capperino-Garcia has tweeted 2 images on Twitter. Even though Riot gave away very little about the skin line so far other than its general theme, but the images paint a picture of another anime-inspired range, which seems will have a strong link with nature.

So far, in our opinion, Ahri, Yone, Kindred, and maybe Lillia (her existence isn’t officially confirmed at this point), but she seems to tie into this theme. The reasons behind our ideas are because we were reminded of the short story Perennial which mentioned Spirit Blossoms.

The story itself features 3 spirits which we think will have skins representing them in the upcoming Spirit Blossoms universe:

The last but not least, Lillia, the new Jungle Champion of LoL. In one of her leaked voice line, there is a worth-mentioning one: “Poor lost spirits beckoning to bloom…”, “I’ve been waiting for you.”.

Riot says we can expect to find out more (July 7), we will update for more ìnformation about what the line will bring and which Champs will be receiving a new look.

Read more about the next champion – Lillia.