LoL: Wild Rift can be download rather than a joke? 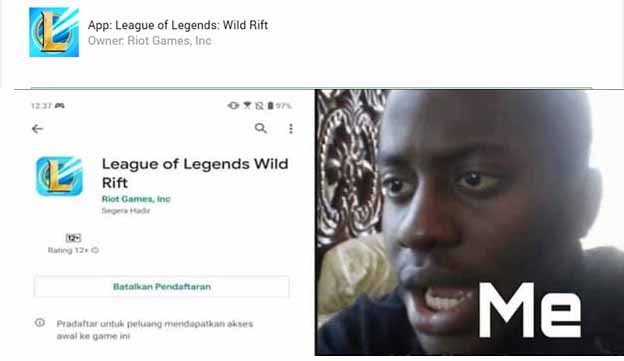 On April 30, Riot Games conducted an unexpected update for LoL: Wild Rift in several countries around the world on the Google Play app store. Riot Games’ recent projects include Legends of Runeterra, TFT Mobile and recently the Tester Wild Rift.

However, it is not without exception. Recently, a foreign gamer believed to live in Southeast Asia, posted a photo showing the download process of League of Legends: Wild Rift on Google Play with a capacity of about 2.56GB. However, the authenticity of this image is still a big question mark and can not really put 100% trust.

When all gamers thought that this was a joke of Riot Games, they accidentally discovered that, in some Southeast Asian stores, specifically Indonesia, there were statistics of download League of Legends: Wild Rift posted public on Google Play.

From this, two things can be inferred, one that more than 5 successful downloaders want to “hide” the information. Second, this is probably the employee of the new Riot Games download League of Legends: Wild Rift.

However, it is still not possible to confirm which of the above points is correct. Because only downloadable, Google Play will record this number more than 5. This need to wait for more information published by Riot Games in the near future.

Left, at the present time, all are questionable, but also gives gamers hope. Currently, Google Play of some countries has not been “considered” by Riot, the status of League of Legends: Wild Rift is still a pre-registration form and the update time is still October 11, 2019, i.e. at the time Riot Games announced their projects, including the League of Legends: Wild Rift, Legends of Runeterra and Teamfight Tactics Mobile…

To register to become a tester of League of Legends: Wild Rift, gamers can follow the following instructions: Instructions to become Tester Wild Rift