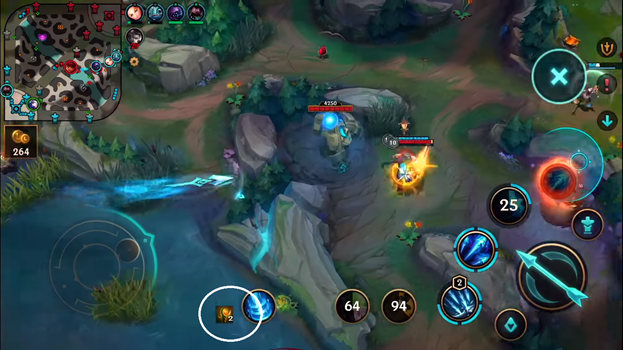 No longer being ridiculed because of the “s” behind its name Riot Games, Riot Games announced a series of its projects in 2020. From League of Legends Wild Rift to the League of Runeterra and another FPS game. All of those promises are masterpieces and will reach gamers in 2020.

This mechanism will help newbies to the game, but at the same time retains the differentiation of players like the PC version. Because when you farm a minion successfully, the gold will receive more, until some time, the lane of the last hit better will completely overwhelm the player who does not know last hit.

How to login for Teamfight Tactics Mobile without waiting in queue after 200,000 people

In terms of the Ward mechanism, instead of a free Ward like the PC version, there will be fixed Ward points on the map. Each side will have 8-10 Ward slots on their part, and each player needs to stand nearby to activate them.

Ward after activating will disappear in a certain period of time, so you need to re-invade it if you want to see that place. (Each champion can only activate 2 Ward at a maximum, in order to avoid the situation of supporting go to plug all Ward in the map

Wards time will be shown in white bar.

The Wards mechanism will make the team have to coordinate with each other if you want to have better vision.