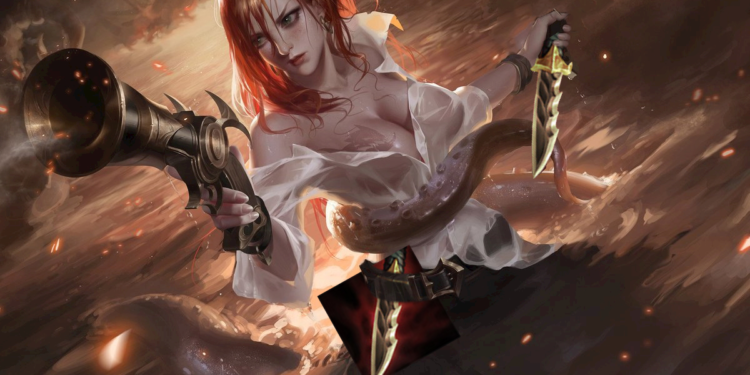 In this season, Miss Fortune Lethality build is familiar with many players, but this broken build with Serrated Dirk is insane!

In short, Marksman meta in Worlds is not different from other Tournaments in Summer, when Ashe, Caitlyn, and Jhin are having the highest pick rate. The only difference is that Senna is coming back in meta due to her utility in early, and her attack range in late-game from her Passive.

A pro player Jason ‘Wild Turtle’ Tran of FlyQuest brought us an extremely powerful build: buy Serrated Dirk first then build Critical Chance like Essence Reaver and Infinity Edge later. This build helps her in the early game really good with a bit of Lethality, then keep that stat till the late game combines with a high critical chance.

The advantage of Serrated Dirk is its high damage from a cheap item (1100 gold). This is the perfect item in Laning Phase, you can hold your lane better and deal more damage with 10 Lethality from this item. Trade-hitting now is very easy when you are the higher damage dealer in the early game. After you are stronger than the enemy, go for Critical Build is a piece of cake!

Although Serrated Dirk can not be upgraded to Critical Items, you will not have to sell it in the late game. You must remember that you can upgrade to Edge of Night, an item that gives you the ability to block a skill from opponents. Lethality is not really mattered in the late game but the blocking ability can save you in many clashes when an enemy assassin can kill you instantly. Depend on each circumstance, you can decide to sell or upgrade Serrated Dirk.

In conclusion, Serrated Dirk is a cheap strong item in the early game, it increases Champion’s damage dealt at a low cost. It is suitable for the fast-paced playing style with many small combats or ganks in the early game.