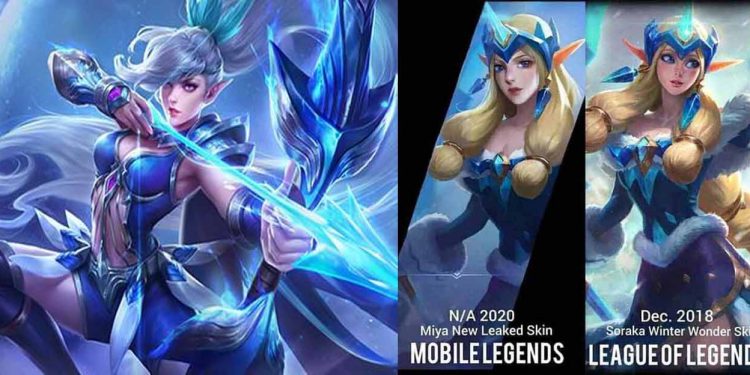 ML copy LoL – The fact that Mobile Legends: Bang Bang was criticized by the League of Legends community for stealing the image of Winter Wonder Soraka is just a misunderstanding?

Recently, on the Reddit forum of League of Legends has published a controversial article quite fierce in the international gaming community. The content of this post is a comparison image of Skin 2020 of Miya in Mobile Legends: Bang Bang has been revealed and the Winter Wonder Soraka skin in League of Legends.

It is easy to see that these two images have different styles, but the main character is completely matched, from Soraka’s outfit, hair style to long ears, which are reproduced in the image given. is the “N/A 2020 Miya New Leaked Skin Mobile Legends: Bang Bang”.

This has sparked a wave of backlash from the gaming community, which is mainly a criticism of the blatant copy behavior of Mobile Legends: Bang Bang.

However, after thorough investigation, the image of Miya’s leak skin actually did not appear in any of Mobile Legends: Bang Bang’s media, and according to official information from Moonton, Miya also not on the list of skin launches in the near future.

The basic skills of a pro player that anyone can learn

In other words, the image that is said to resemble Soraka is just a fan-art, making many people confuse Mobile Legends: Bang Bang dare to use the original Winter Wonder Soraka’s image in League of Legends to be a champion skin.

As a result, a wave of criticism from a part of League of Legends gamers broke out fiercely, in the context that these two gaming communities were inherently dislike of each other.

Talking about the unhappy relationship between two manufacturers of League of Legends and Mobile Legends: Bang Bang, Riot Games sued Shanghai Moonton in 2018 for the reason that the manufacturer used Unauthorized use of a lot of image copyright and champion design ideas of League of Legends to put into Mobile Legends: Bang Bang.

As a result, Riot Games won the case and Moonton had to compensate Riot Games for up to $ 2.9 million. However, after that, the Moonton was still criticized by the League of Legends community for borrowing ideas, such as MV 515 UNITE BANG BANG whose script and visual effects are very similar to Pop Star, while Teaser The Terizla trailer is no different from the Teaser Trailer of Sylas.

So the fact that the League of Legends community is quite harsh before the image of the unknown origin is not strange, because copying the idea of ​​League of Legends has been a very normal thing of Mobile Legends: Bang Bang.