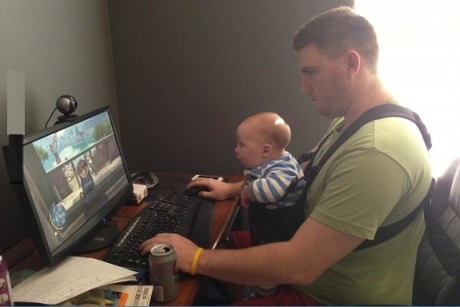 We often have our parents prevent us from sticking to video games. But what if your parents want to play games with us? That makes no sense… But yes, it actually happened. Here is a real story about a gamer dad shared recently in Reddit.

My dad started to play League of Legends, he never played a game like LoL and is completely new in this type of play.

I build him a PC with my own money so he can get a Smooth experience (Amd 2600x / RX590) with a 24inch screen, Logitech G Pro Wireless and a Mechanical Keyboard

He is 54 Y/o and loves to play Olaf… in Mid, I told him he is Jungle or Top, but he did pretty good against Bots, I told him the basics about the game (Farming, Items Build, Runes and look at the map every 10 seconds for potential enemy ganks or get a clue what happened on the Map).

I myself i am a Plat Player (Quinn Top) i did a new account we started together, i downloaded him Blitz App for easier Rune management and item pathing, after arround 20 Days we both hit Lv30, he was ready for Ranked, sure not, i dont tryharded bc i would boost him and that is not my plan he should learn to accept loses and get wins by himself or team play. (I played champs i never played)

We both got placed Iron, after 4month he grind lonley, he reached Gold with Olaf mid with 52% Winrate and he fround a new champs he like yeah it is… freaking Yasuo.. im dying inside.

i was playing Gragss/Sett Top/Jungle and he Olaf Yas mid, if he get Yas i go Gragas, we climbed very fast, and he reached Platin after 5/6 Month after he first time installed the Game.

Yeah, a 54 Old Dude overtaked my 10years experience in LoL.

But why i write that down?

My Father had a hard life, he got kicked arround as Kid, he telling lies to stay relevant, bc he never achieved something in his life, he gave up, even with his Wife (He got 3 Children, My sis 28, my brother 25 and me 23 he got knived down by her, he got beaten up by her and got poised. he lost all his teeth because of that that with 40/45yo. i remember everything i was 5/6yo there. they divorced and she moved away, but she came back (2 blocks away) She had drug issue, my father tried to help her, but she had bad friend that had tried to run over my dad when he was bicycle… Years later she was found death in her kitchen by me and my older bother (we was forced to meet her every weekend) my dad broke, he goes completely inside never talked, he lied about her death, never showed emotion. He got aggressive against me and my brother and beat us up, but i never gave up, years later i grow at got stronger than him, we had fight he was still broken, he can’t get over it. my bother and me talked to him, about mom… first time we saw him cry in our lives, but only short time he was back to normal. months later i had an idea, he was only watching TV and did nothing.

I gave him a Smarthphone and going outside with him playing PokemonGO he was happy, me too. then i safe up some money and build him a computer, bc he was interested in LoL… he played it and he was happy, he was smiling, beside he played bf/cod but he start to maining LoL. He got back to happiness and grow like a child to 18yo, he found out he can meet people, chat with them, talk with them and have friends, but he was afraid to reveal is real age, but i pushed him to say it and ding, another lady was, 10y younger an interested, and 750km away, they met and got good friends, because of League of Legends he got a new and better life. idk if they are dating, because is fresh and they met second time last week.

he is happy im happy, my grandma is super happy 😊

if u have a dad or a mom thats lonley just maybe talk to them, if they little bit intested in Gaming invited them to your room let them watch over their shoulder, theyll be happy that their child doing something with them.

He still plays lol, different Champions, and his new Girlfriend (not confirmed) playing alldaylong, idk my dad is like a teenager now 😅😁 He is close to reach high plat, he overtake me, but only bc he plays more than me (yeah yeah excuse)

I would post his op.gg so he can get more people for his FL, but he said he is afraid about people that troll him.

ik my English isnt the best, but i wanted to share the Story, and maybe someone have parents that are interested and u get a new and better relationship with them 🙂 if s1 is interested in updates, i can do it.”

Many new parents today grew up with gaming consoles in their homes, which followed them to adult life. For many gamers, video games present a way to make friends, to feel like they’re achieving something, and maybe to make some money doing it. Games can also be a coping mechanism. When a dramatic life event happens, like the birth of a child, games are where a new parent might find respite.

One new father, Jim Festante, 41, said that during the first six months of caring for his newborn, he spent some nights sacrificing what sleep he might have gotten to blow off Steam by playing video games. “It was necessary self-care,” said Festante. “It was definitely necessary.”

Laura Stockdale, Ph.D, a psychologist and project manager for Project M.E.D.I.A. at Brigham Young University, is currently collecting data on 510 gaming and nongaming families over the next 20 years to research the effects of media on child development and the likelihood that pathological gaming tendencies will develop. Dr Stockdale said she worries that parents who binge on video games, especially in front of their children, might be neglecting to show how much they value their children by failing to listen or pay attention to them while they game.

Dr Stockdale said she gets concerned, for instance, when parents justify their own video game habits by saying that it’s O.K. because their child is “is playing with” them. “Their 3-year-old isn’t actually playing,” she explained. “You can’t just hand a 3-year-old a controller and say they’re playing.”

Last year, the World Health Organization included “gaming disorder” as a clinically recognizable and significant syndrome in its latest edition of the International Classification of Diseases. Gaming disorder can occur with both online and offline games and includes symptoms such as “marked distress” or an inability to function in a variety of situations, both personal and professional.