New 5 champions that might be added to TFT: Mech-Pilot are going to have new members 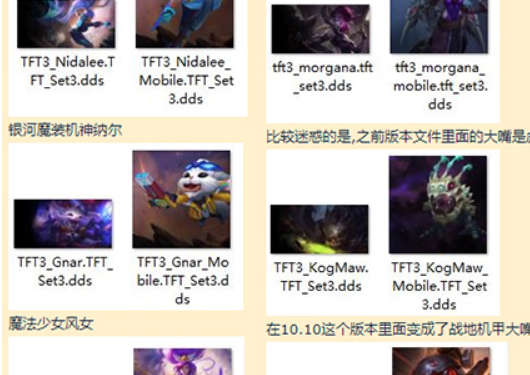 Recently, Riot Games has some revealed information about new champions for the next updates of Team Fight Tactics. Riot Mort (Lead Designer of TFT) has confirmed that there will be a lot of changes such as reworking or removing some champions, adding new champions or new origins/classes, etc. to the game in the middle of the season.

After patch 10.10 had been released all over the world for a few days, a Chinese player found out some images of new champions for TFT in WAD files located inside League of Legends folder.

According to the image, it can be seen that Nidalee and Gnar skin belongs to Super Galaxy theme which is the same as Fizz’s, Annie’s and Rumble’s. Apparently, We can guess that Nidalee and Gnar are going to join Mech Pilot in the next patch. With these two new champions added to TFT, Garen might have a new ability if you can stack up to 5 Mech-Pilots in your team. Trying to get to 3 Mech-Pilots to activate Garen is already very difficult because Fizz is a 4-gold champion so if you want to play Mech-Pilot team comp, you have to level up as fast as possible. Currently, we don’t know how much gold is required to buy these two champions in TFT. If Nidalee and Gnar are low cost champions, they could possibly be a buff for Mech-Pilot which allows you to activate Garen faster.

Secondly, it is Janna in Star Guardian skin that might be added into TFT. After this information was spread on the internet. Many people guess that Janna will be a 4-gold champion and she will replace Soraka. Mystic champions are not usually good at dealing damage because they focus on defending and healing so probably Janna’s skill might be her (E) Eye of the Storm which will shield any ally and give them bonus attack damage/attack power or it might be her (R) Monsoon which will push the enemies back and healing allies like season 2. All are just theories, we will have to wait for Riot to confirm what her skill will be in this season.

Next is the Blade Mistress Morgana – a skin that might go along with Aether Wing Kayle , Bullet Angel Kai’sa and Gun Goddess Miss Fortune. She might become the 4th Valkyrie in TFT. We can possibly see that there might be 4 Valkyrie to activate new bonus stat. It can also help us stack Valkyries faster. Her appearance in TFT is the only thing that we could actually believe, there is no more information about her skill or stat. In my opinion, i think she will be a Sorcerer like TFT season 1.

Finally, it is Kog’Maw. The guy who found these images said that before patch 10.10 he had searched for image files once and there was only default Kog’Maw image, after the 10.10 update, the default Kog’Maw image was replaced with the Battlecast Kog’Maw skin. This is very exciting because if Kog’maw is a Void champion, we can build Void Brawler team comp faster instead of waiting for Cho’Gath or Vel’Koz to show up. However, if Kog’Maw skin is the Battlecast one, we can expect to welcome a brand new origin because the Battlecast theme is also related to a lot of champions like Skarner, Urgot, Viktor, etc. Maybe Riot will actually add a whole new origin into the game, who knows? In season 2 Kog’maw cost 1 gold and his skill was his (R) Living Artillery: “Kog’maw fires a living artillery at a great distance and deal damage on target”. I hope you will be excited to see such new things that Riot might bring into Team Fight Tatics in the next updates.

Tags: Mech-PilotNew 5 champions that might be added to TFTTFTtft news
ADVERTISEMENT