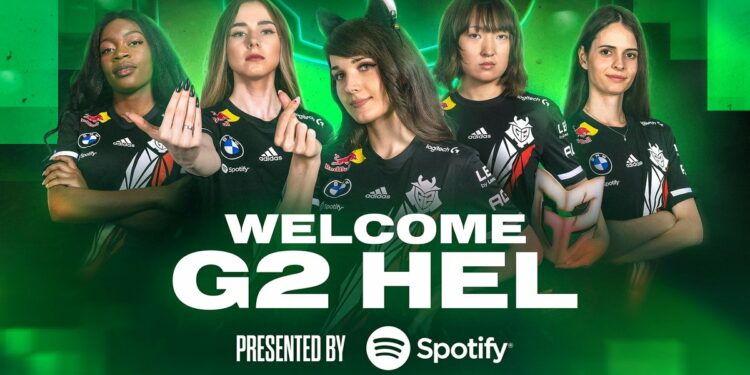 The new all-female League of Legends team from G2 Esports is called HEL after the Norse goddess of death. The new team, which boasts some of the best players in the globe, will follow in the footsteps of the Gozen team, another all-female roster created by G2 in 2021 for the VALORANT scene, in paving the road for female representation in esports.

According to G2, the team is made up of the “most notable” female esports talent in the League market. Olivia “Olizia” Nnenna Calistus, Agn “Karina” Ivakeviit, Alena “TIFA” Maurer, Ve “Colomblbl” Monvoisin, and Maya “Caltys” Henckel make up the entire team.

The latter made a comment about the team’s formation in which she emphasized the significance of G2 HEL’s founding for the portrayal of women in esports. I’m hoping that this will provide women more opportunities to play competitively in esports and encourage more young girls to do the same, added Caltys. The top Elo League female player in EUW chimed in, saying that G2’s “leap” in selecting the lineup and investing in an all-female squad would help demonstrate to the world that there are female players who are capable of playing the game at a high level.

Her teammate TIFA expressed similar enthusiasm for joining G2, even saying that it was her “childhood dream come true.” The formation of the G2 HEL team, according to TIFA, is a “major milestone” that dispels prejudices and provides female gamers with a wealth of prospects and possibilities. It is something that “we’ve all been wanting and waiting for for a long time,” she continued. The next generation of female gamers will be inspired by this team to “embrace their aspirations without restrictions or limits,” she continued.

Which circuit the HEL squad will compete in has not yet been disclosed by G2. The group claims that this is the case because Riot Games, the company that publishes League, still lacks an official circuit for the team to compete in. As a result, the development of the G2 HEL roster can be seen as a “leap of faith” that will position the organization as “pioneers” and leading proponents for equal chances in the sector.

G2 is hopeful that this choice prompts a shift in the scene’s organizers, compelling the publisher and tournament directors to put in place infrastructure to support female League players. According to the worldwide organization, G2 HEL “will exist to control this competitive female scene,” much like G2 Gozen now rules over the VALORANT female scene in Europe.