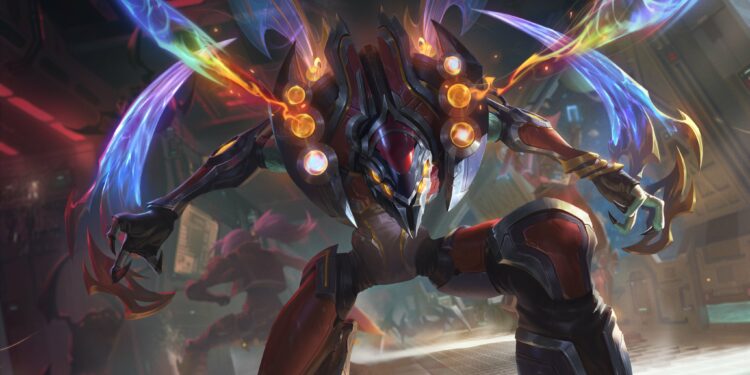 Skin Line: Odyssey has been introduced. Despite the hype about Dragonmancer and Worlds 2020 hasn’t been lowered yet another

The hype is back! Asides Cosmic and Dark Star skin line, this Odyssey theme will also base on the idea of Universe. We don’t have much information yet, but surely this will bring fresh air to some champions that has been pretty long time since they last got their skins.

They also posted 2 Splash Arts for the incoming skin line, featuring Twisted Fate and Kha’Zix, each champion will maybe represent a faction. As you can see in the Twitter Post, Kha’Zix and Aatrox will stand for the Dark as they have the “Night” Symbol. On the opposite, Sivir, Twisted Fate, and Karma belongs to a sort of “Bright Sun” faction.

Odyssey Twisted Fate this time will still remain his red color scheme, maybe stand for his “Lucky Charm”. Accompany with him is Sivir, with bright blue hair similar to Super Galaxy Nidalee. The gloves on his right hand, look pretty similar to Iron Man’s Armor, extremely cool and high-tech. You can also notice his blue core in the middle of Twisted Fate’s chest.

Odyssey Kha’Zix looks as scary like he has always been, now with bonus sharp claws from his hands, Kha’Zix and Aatrox will maybe become the main antagonist of this skin line.

Also, a good new for any players who are stacking their gemstones, Hextech Kassadin will also be released in Patch 10.21 PBE.