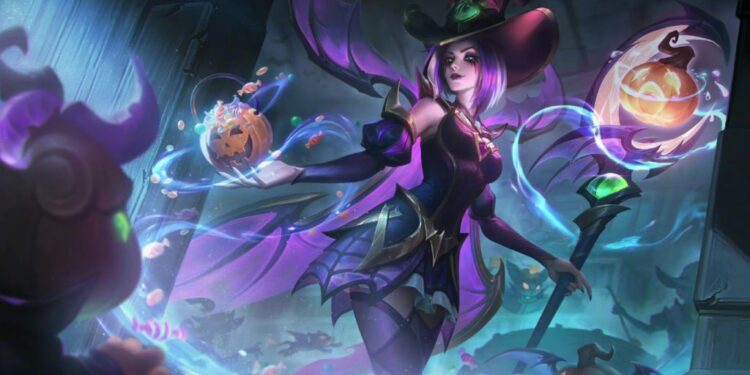 On the Rift, the spooktober is returning. For the Bewitching skin line in League of Legends, Riot Games has released five new skins.

Around Halloween, witches, bats, and pumpkins are likely to go live on the servers and enter PBE. Neeko, Cassiopeia, Anivia, Senna, and LeBlanc skins are among the newest additions.

The five new additions, which join the 28 skins already included in the Trick-or-Treat theme, offer a slick yet frightful appearance. The sound effects are simply the icing on top of the animations and visual effects, which together evoke memories of something evil.

The Deceiver LeBlanc chooses to wear a different purple cloak than usual and uses her own staff in place of a broom, but otherwise plays the part of an evil woman as usual.

On the other hand, the upbeat Neeko takes on a spookier appearance that resembles a black cat. Could it be a homage to the animal’s Japanese name? Whatever the solution, it is always preferable to keep their favor by offering goodies rather than tricks.

Anivia is another unique portrayal; in contrast to her typical phoenix appearance, Anivia assumes the form of a graceful bat. The finishing touches to a skin that already looks fantastic are a pumpkin for her egg and a tree for her reminder of home.

Senna utilizes a ghostly mist to scout targets for her alive pumpkin-eater weapon while Cassiopeia engages in black magic experimentation and sharpens her lethal fangs concealed beneath her pointed cap.

League gamers should prepare to be tormented by Halloween very soon. Riot has not yet specified the precise date and patch on which the new Bewitching skins will launch on the Rift.