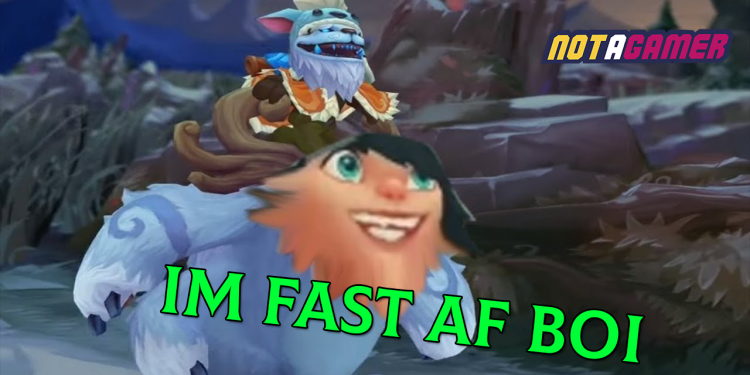 Honeyfruit is one of the useful tool for jungler, can be very effective depends on some situations. However, recently Honeyfruits planted by Riot in Summoner’s Rift seem having some problems itself, it makes Nunu and Willump speeding after consuming it.

Honeyfruit helps player recover some of champion maximum health and mana when consume, then slow for 35% in over 0.25s

Nunu W – biggest snowball ever allows him to disable all slow effect and immune to slow when active. At first this skill will slow him a little bit in 1 second, then become ghosted (increase 85-255 movement speed depends on level).

Honeyfruit suppose to be not apply any effect to Nunu and Willump, but now it can boost Nunu with a huge amount of speed while Nunu is rolling with his snowball.

The speed scales with the number of honeyfruit Nunu comsumes.

Seemingly, Slow effect and immune to Slow have conflict each other once again. This case happened once a year ago, the same with Tahm Kench. When you own enough slow resistance like Phase Rush procs (grants you speed and 75% slow resist) along with boots of swiftness ( grants 25% slow resist), the percentage of slow will convert to bonus movement speed instead of being 100% immune to slow in theory.

This bug will soon be fixed by Riot and while they are still try to find the solution, be sure don’t use this in Rank. Despite the thrill of causing car accident in League, illegal act like speeding will be caught eventually.