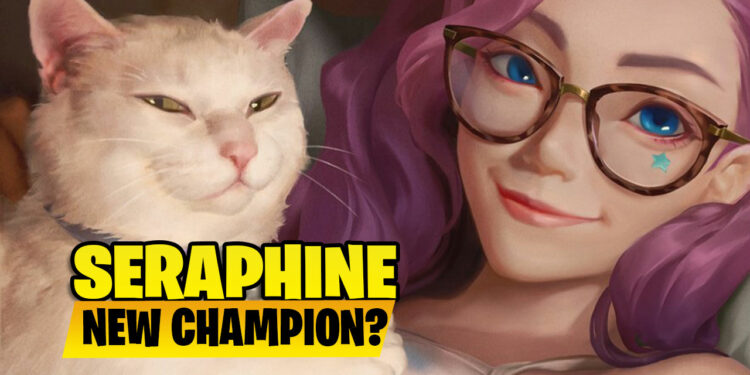 Some photos of the new champion has already been leaked, which were called Seraphine, and she will be one of the Worlds 2020 singers.

Before we delve deeper into the matter, all of this is suspected, and parts of the community have just leaped into it.

This twitter account was created in June 2020 and represents a musical character named “Seraphine” (same @ on Instagram), from Streamie’s leak, we learn that Seraphine is a “sensational” mid-lane musical mage. We can definitely imagine the sensational dimension that comes from her person’s potential success with a K/DA or TD setup style for Worlds 2020 ‘s band (allegedly Crowd Control but it is all juts hearsay right now). Get-go art is absolutely phenomenal, and it really embodies a Riot-esque style and can be compared to K/DA, Odyssey, True Damage, etc.

Proceeding, she has already uploaded songs, and nice quality music as well (it is a cover, however, still sound beautifully). Despite her art was already stunning from the get-go, she wasn’t really mentioned as an artist anywhere in her profile, just an (aspiring) musician. Several users said that her music sounds like it is from a decent studio or deserved Riot quality, not as indie as her bio stated. In addition, while admitting a lot of confirmation bias-based, her Instagram features the following post:

Where she says “Hello!” and 你好 (“Hello” in Chinese), as this year’s Worlds will be held in China. Assuming we do not misunderstand that Seraphine will be released worldwide – her concept will also make sense if she were part of the band for Worlds 2020 as a “sensational” mage, possibly represented correspondingly to Ahri’s success in the Popstar – K/DA universe.

Moreover, she also has a Tibbers Teddy Bear in the background of one of her posts:

Her cat’s nicknamed is Bao

According to u/Xzcouter, He theorized that her IRL persona (like how TD was set in the real world) is possible and she is a Mount Targon’s default champ due to the starry images in her tweets.

He also discusses how Sepharine diary pages (as well as some of her other posts in general) can be used to contribute to her potential lore, one that is clearly defined as:

I usually have to wait a year before I like a photo of myself. At the moment it’s hard to appreciate where I’m at, but now that I’ve grown, I miss her :’)

He was one of the first to find her Twitter account! Unfortunately, his posts were automatically marked by the bot.

u/RaffyPooh stated that the name of her cat is Bao, which gives more credit to the Chinese market’s potential appeal during Worlds 2020 in Shanghai.

u/Kardiackon pointed out that she actually claims to be a character in the images on her Instagram, rather than simply declaring that it is a persona:

u/Elephox mentioned that the song Seraphine covers, Childhood Dreams by Ary, is authorized to Universal Music Group – the corporation for which Riot recently announced as an official partnership for Worlds.

Several people have also noticed that she follows numerous Chinese accounts on Instagram/Twitter (a continuation on the theme of Worlds events this year in China, which will presumably reveal Seraphine). Furthermore, her tweet mentions she was heading to LA, where Riot’s headquarters is. This might just be a fun reference to her recording Worlds 2020 songs.

Samira will be the next champion on the roadmap, which was targeted to be released somewhere around patch 10.20. Which also means Seraphine will very likely be put on a direct collision course with Worlds 2020, patch 10.24, and time it perfectly for her to release the official theme song for Worlds.