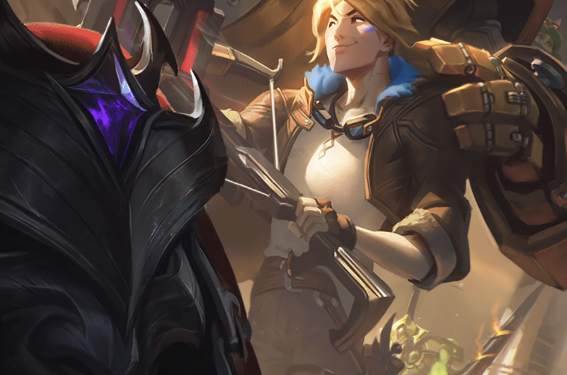 Recently, the hottest conversation around League of Legends must be all the new changes that they are making to the Shop and Items in Preseason 2021. These adjustments completely change League of Legend’s meta, making it a brand new experience for players. There are tons of Mythic and Legendary items for players to choose and everyone is adapting for the new season.

However, not only Riot introduces tons of new changes, but they also don’t forget to tease the upcoming new champion that is coming to the League. The community has spotted the new Support champion in the Preseason 2021 teaser. Reddit user: Rasolc posted a thread on Reddit about how he found out about this champion. Here is what he has shared:

“I was looking around the new promotional image for the new items in preseason trying to see how many champions/details I could spot when I noticed this. Right below Ezreal and Blitz, there’s this lance weapon that looks a lot like the weapon we can see in the promo image for the next support. Similar shape and shares this fire-like effect emanating from the lance. It doesn’t tell us anything about the new champ but I thought it was a neat little teaser.”

Looking at the bottom right corner of the picture, we can notice a green guy holding a lava-looking gun/lance. This is very similar to the picture that Riot announced about a month ago of all of their upcoming new champion in the Champion Roadmap (image below).

“Attention! The empire will pay greatly for the capture and detainment of this runaway criminal. The fugitive is EXTREMELY dangerous, so approach with caution. They are heavily armored and will attack if even slightly provoked. Wear light armor, as reports show warbands have been killed with their heavy gear twisted and shattered, littering the ground around them. The criminal’s been known to mount a quick retreat when cornered, so bringing a highly-trained team is recommended. If you somehow manage to detain this criminal, please bring them directly to the closest empire-building marked with a black rose.”

Obviously this leak doesn’t tell us much about the new champion, but it might be possible that he will come out very early, maybe in Patch 10.24 or 10.25. We will keep you up to date with this new champion if we have any new information.