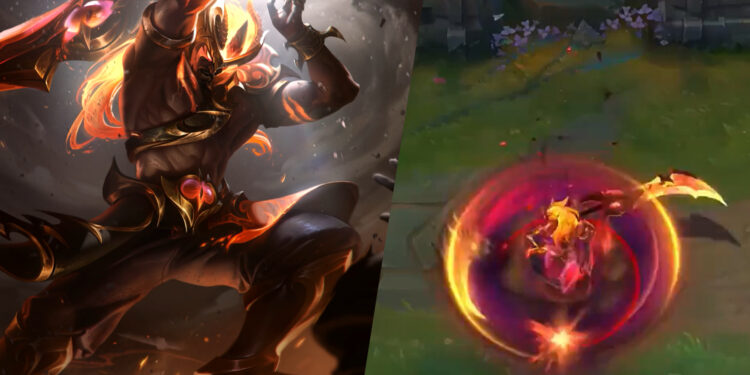 League of Legends players are getting very excited as with the conclude of Sentinels of Light event just recently, Riot Games released the Dawnbringer & Nightbringer event that will get a new wave of content, including 6 champions in total coming to this skin line: Morgana, Yone, Lillia, Tryndamere, Vex, and Kayn.

While Tryndamere players were ecstatic with the new design, many were afraid that it came with a visual effect that would make him much easier to play against.

The upcoming Nightbringer skin for Tryndamere was finally shown in full, but League of Legends players instantly noticed a feature that will make it a “pay-to-lose” skin.

The Nightbringer Tryndamere skin has been called “pay-to-lose” by League of Legends players since it plainly displays the period of time he is unkillable during his ultimate, Undying Rage.

Tryndamere’s ultimate is usually signaled physically, with his blazing red and a unique sound effect of him shouting. Players will be able to play with the period of time he is invulnerable to death now that they have a better idea of how long it lasts.

Players were concerned if this new modification meant that all of Tryndamere’s skins will get a cosmetic upgrade, or if the timeframe would be restricted only to the Nightbringer skin.

For the time being, some Tryndamere players are even considering skipping the skin release since it may influence how their opponents play against them. After the League community’s first reaction, it’ll be interesting to see whether Riot changes its mind of this feature.