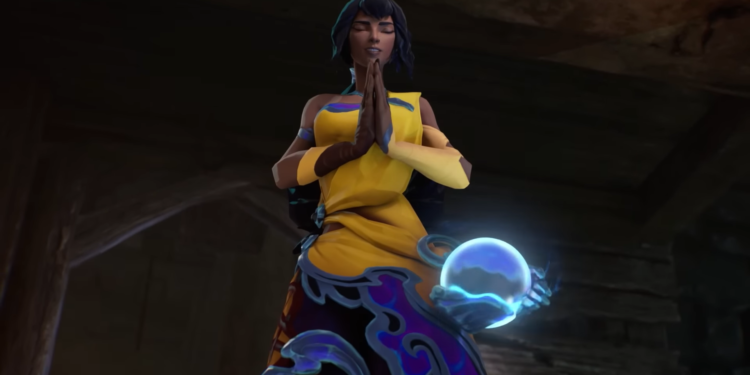 Nilah, the new League of Legends champion, was revealed this week, with Riot Games providing fans with their first look at the character

Fans concluded from clips of gameplay that the melee bot laner attacks enemies close and far with water-based spells and a “water whip.” However, the notion was speculative because the League of Legends community was still unaware of the full breadth of the champion’s skills.

Some information and images regarding the champion were reportedly leaked to give players a better idea of what Nilah is capable of. Based on her gameplay preview, the leaks were largely accurate, in some way.

The champion model is what seems most stand out in this champion as being known as a non-traditional bot laner. Nilah’s name and outfit are Indian-inspired since she is dressed in a saree.

Furthermore, it was obvious that her weapon was an inspiration from Indian sword. Riot’s Lead Gameplay Producer Ryan ‘Reav3’ Mireles confirmed Nilah’s weapon is a Urumi, an ancient South-Indian whip sword, in a recent Reddit post.

Originating in modern-day Kerala in India, Urumi is a sword with a flexible, whip-like blade constructed of strands of flexible steel, although in the game, Nilah’s weapon is water-based.

It is believed to have existed as far back as the Sangam period. It is considered a steel whip, and hence requires prior knowledge of both that weapon and the sword. In Indian martial systems such as Kalaripayattu, the urumi is generally taught last because of its complexity.

The sword necessitates a high level of concentration, agility, and ability. The sword is difficult to manage, and an unskilled user risks injuring himself/herself. Nilah’s look is similar to that of a South Indian girl with enormous power and the ability to wield a unique weapon.

Nilah looks to be a pleasure to play with, and as a non-traditional bot-laner, she may provide a fresh perspective to the bottom lane. Riot Games’ experimentation with heroes like Zeri and Renata is fascinating. Needless to say, Nilah has great hopes as well.