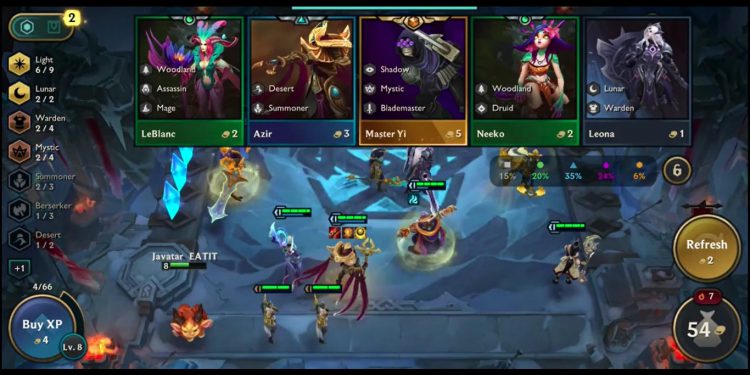 Riot Games has officially opened the Teamfight Tactics Mobile in several countries to bring us the first gameplay videos of this game.

The official Twitter page of the Teamfight Tactics Mobile has posted information about the closed beta of this game on mobile. Even in some lucky countries, this trial version will be coming today, other countries will gradually try it out next week.

When we set out to bring TFT to mobile, we immediately realized that the existing out-of-game experience for League is not mobile-friendly. So, we decided to make a new one that would be tailored to TFT and your mobile devices. The new experience is all about one thing: getting you into the game.

As part of this streamlined approach, the TFT mobile client initially supports social (lobbies, friends, and invites) as well as the ranked system and the progression pass. We will be adding more functionality steadily over time.

Besides that, Riot Games are aiming to bring TFT to as many devices as possible. This might vary region to region, but typically you’ll find that iPhones 6S or later are supported on the Apple side, while Android fans can expect phones running OS5+ and 2GB of RAM and above to work well. While we tried super duper hard to make Razrs and Sidekicks function, it was just a nonstarter.

According to the announcement of Riot Games, servers under the management of Garena and China will not be able to test the Teamfight Tactics in the near future.

Will I be able to buy stuff?

While we will not initially be launching with a store in the client, one of our top priorities is making it so that you can engage with all the content TFT has to offer. The store will follow in an update after the launch.

Will my inventory of Little Legends cross over?

We built TFT Mobile with existing players in mind. In most regions, if you log in using the same account as on PC, all of your Little Legends, Arena Skins, and other content will carry over. Similarly, anything you earn on TFT Mobile will show up if you choose to play on PC.