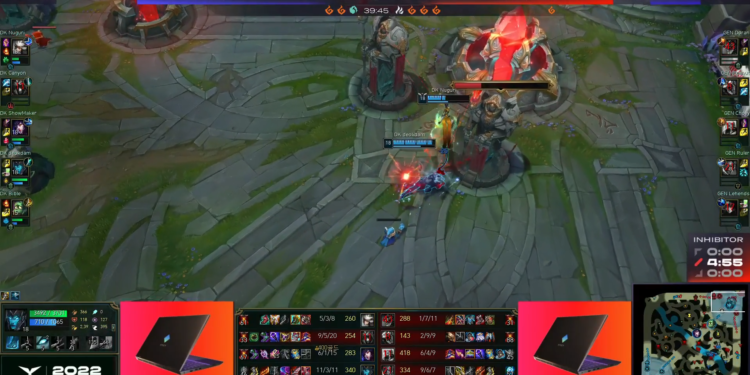 Two of the most prestigious League of Legends teams are Gen.G and DAMWON KIA. There is a lot of history between these two teams, with DAMWON winning the 2020 World Championship and Gen.G consistently falling short of greatness.

However, the story has changed this year. Gen.G now leads the LCK and appears to be on track to win their first domestic crown, even defeating T1. However, DAMWON KIA made an important roster addition that allowed them to pull off a victory.

Meet Steve, the freshly hired caster minion of DAMWON who was given that name by the English casting crew. Without being ironic, this caster minion actually helped DAMWON win this match.

Even though he only plays a small part in the video, the fact that this caster minion survived is more significant than you might realize.

Structures in League of Legends feature backdoor defense. In order to prevent players from simply walking up to towers and taking them in the late game, this mechanic was included. However, that layer of defense is nullified if a wave of minions, or even just one, enters the area of a tower.

Notice how DAMWON focused on Steve so that neither the towers nor the minions could aim toward him. Steve would not have been able to smash those towers and win if he had received even a single hit.

Keeping that one caster minion alive allowed DAMWON to secure their victory in Game 2 of the series while Gen.G’s respawn timers were rapidly running out. However, despite DAMWON’s historic win in Game 2, Gen.G still prevailed 2-1 to take the series.

Although it is disappointing for DAMWON supporters that they were unable to witness them defeat Korea’s top team, we won’t soon forget the tale of Steve’s bravery.