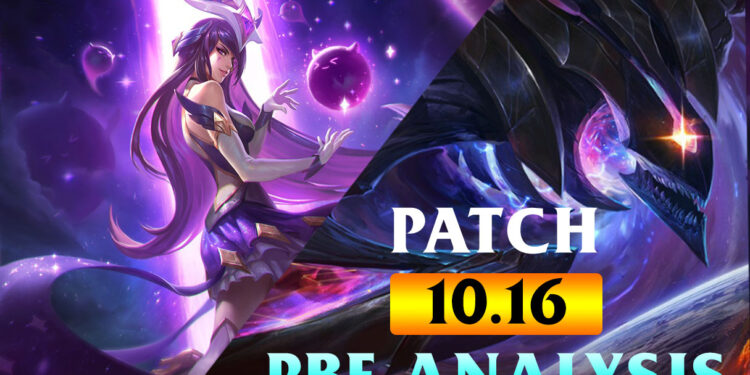 Patch 10.16 will feature numerous changes in preparation for Worlds – but will it have an adverse effect on casual players?

As with every season, late July and early August is the time for a set of massive changes, in order to adjust the tournament meta, apparently in an attempt to uphold the healthy environment of the E-sport meta.

These changes are slated to be live on patch 10.16. While it is unclear about the impact of the patch on casual players, tremendous changes like this usually mean a giant shake up of the meta among casual League players.

The Dark Sovereign has been previously hit with 2 consecutive nerfs near her newest skin release, and a third one is underway – a notion that is unprecedented in the history of Riot Games. Despite having a suboptimal win rate in both solo queue and in tournaments, her high ban pick rate continues to make her the target of Riot’s nerfing scheme. This 20 base magic damage on her Q at max rank may seem trivial, but it will be a 25 damage nerf once she gains her passive upgrade for her Q, hurting her level 9 power spike quite a bit.

This, combined with the previous 20 mana increase early on her Q and 2 seconds cooldown increase on her E, will make Syndra less viable, like how she was in season 9. Casual Syndra mains can only hope that all of these nerfs to be reverted or compensated in other ways after the problematic Worlds meta ends.

Syndra is one of the examples of why balancing the game around the minuscule percentage of the player base is never a good idea, yet Riot will always fall for this. Not to mention that she is already underperforming at all regional tournaments at this moment. It is expected that she will not see lots of play in Worlds and casual play after patch 10.16 is out.

It is difficult to comprehend the reason why the Voidreaver received a 20% bonus AD ratios buff on his Q the previous patch cycle. If his mobility and stealth aren’t enough, thanks to the increased Q damage, he has an easier time taking epic monsters, clearing jungle and snowballing out of control, becoming one of the most obnoxious jungle pick to play against.

Riot seems hesitant to nerf this void bug to oblivion, perhaps due to their desires to see #epickhazixplays at the pro scenes. Only 10% of the bonus AD is taken away, leaving the solo queue monster intact in patch 10.16. Kha’Zix’s buff is an example of why patches preparing the meta for Worlds are always the most complained ones, at least for casual players who are not used to countering his gig.

Other casualties of the Worlds patch

The Frejordian behemoth had seen one of the lowest win rate ever post-rework, thanks to the general lack of understanding of how his kit works. However, high Elo players quickly figure out how to abuse his absurd tankiness and powerful turret diving potential after a series of buffs made to the bear. As such, his Q is getting a slight reduction in the movement speed boost to make him easier to kite and escape from. Overall, the demigod will still be a strong pick after patch 10.16 is out, and is expected to wreck the pro scene soon enough.

Nocturne mid lane has been popping off in pro scenes. A powerful pick, he is designated to have his passive cooldown increased to stop him from sustaining a lot in the mid lane, while retaining the sustain in the jungle and team fight by increasing the cooldown refund on-hit against monsters and champions. The change in patch 10.16 will negatively affect the performance of Nocturne in lane, especially against ranged champions where he has harder times to reduce the cooldown of his passive.

A favorite power farming jungler in high elo and tournament, Karthus has been seeing lots of plays during the recent seasons. His high DPS from Q is what makes him powerful, and the recent change beefed up his mid lane prowess. One of the buffs in the previous few patches will be reverted. His Q will have the AP ratio slashed by 5%, and 10% on single-target hit in patch 10.16. Quite a tremendous hit, actually.

Released earlier this year, Sett’s W is always a troublesome ability to balance around, thanks to the fact that it has two parts, and both parts are equally broken. Who thought that an ability with a massive HP scaling shield while dealing the same physical and true damage proportional to the shield amount is a balanced feature?

The number nerf on his W can be significant early to mid game, but will be less noticeable once he becomes tanky enough. This change is more likely to be aimed at Sett support where he has less agency (and gold) to build pure defensive items. Therefore, it is recommended to pick early game champions who can also abuse Blade of the Ruined King against him in patch 10.16 when the Boss is at the top lane.

A favorite pick in LCK, solo lane Karma has been dominating the scene too much lately. As such, the Enlightened One is receiving a light nerf on her Q cooldown and mana cost, hampering her waveclear capability in order to bring her back to her intended support role. This change will also nerf her in-lane harassing potential; however. Therefore Karma’s presence in both solo queue and pro play will be negligible when patch 10.16 is live.

Thanks to several ADC buff patches and the fact that the Frost Archer herself also received some love, Ashe has been the top tier marksman pick owning to her high damage output and high utility. As such, she will have some of her attack speed taken away, lowering her DPS a bit later on. Ashe is still going to be a strong ADC pick for patch 10.16, because her utility power is untouched.

Crowd control, damage, sustain, objective control, escape,…Bard is gimmicky to play, but in the right hand, he is an unstoppable force despite his seemingly harmless appearance. Thus, one of these tools of his is going to be toned down in patch 10.16 to make the Wandering Caretaker fairer to play against.

A favorite tank support pick, Nautilus has been meta for quite a while now. Therefore, some tankiness in the form of his W shield will be slightly chipped away to make the Titan of the Depth more vulnerable to harassment. His late-game tankiness with enough items is unchanged; however. It is expected that Nautlis’s win rate in patch 10.16 will drop significantly when he has to lane against poke-heavy bot laners.

No one really loves seeing a Darius popping ghost and proc’ing Nimbus Cloak then charge right at their face at the speed of light, so it is to be slightly nerfed in patch 10.16.