Patch 10.17 PBE Preview: Yone gutted, Xayah, Varus and Kai’Sa are getting a little too much love 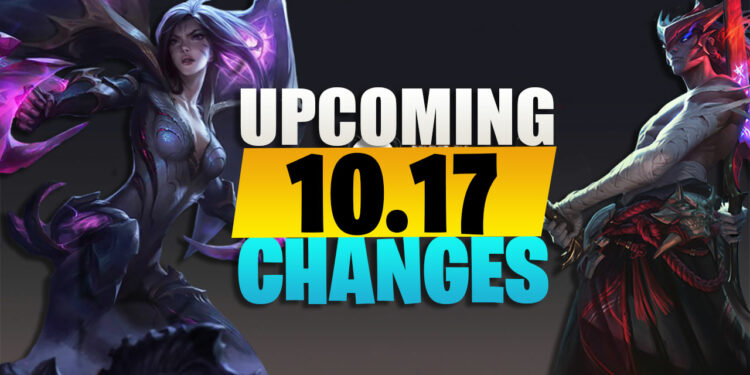 Patch 10.17 PBE Preview is out on Mark Yetter’s twitter and it seems Riot is realizing that Yone is not as weak as most of his enthusiasts claim to be – yet the most ridiculous aspect of his kit, the ultimate hitbox, remains untouched.

Champions getting toned down in patch 10.17:

Yone has been excessively obnoxious, thanks to his uncanny synergy with Death’s Dance and Conqueror, making him impossible to be taken down while enabling him to dish out tons of damage, along with a free get-out-of-jail card in the form of his E. His R has a ridiculous hitbox that hits champions outside of the indicated area, and that is the major issue Riot did not address.
This might hurt him but not enough to put him out of the must pick-or-ban selection, along with Yasuo. Yuck.

This was probably done out of fear that solo lane AP Sona can be a late-game powerhouse in Pro Play, therefore Riot wants to keep her in the bot lane support role.
We seriously think that this champion requires a total kit overhaul, as she is overly problematic to balance.

Mana cost goes up later rank, up to 80 at rank 5. Also comes with W extra shield at edge bug fix
Small adjustment and a little nerf, won’t affect her either in the support role or mid lane role.

Evelynn has become an absolute monster especially in the SoloQ, thanks to the cooldown reduction buffs. Her jungle clear will be a little bit slower, but this will not help a lot, however; as she still scales hard into late game.

Hecarim has been becoming too overpowered after the buff done to him last patch, so a little trimming down would be reasonable to the Shadow of War. He would still be a problem with the Cinderhulk bonus damage and Trinity Force – both grant him easy access to burst damage and tankiness at the same time.

Worlds is coming near, and Qiyana is one of those pick-or-ban champions, so a little toning down is needed to prepare for a more fair and balanced Worlds. Her SoloQ performance will hurt quite a bit, that is for certain.

Champions getting buffed in patch 10.17:

Having been sitting in the gutter for a while, Riot now gives some of her power back for the viewers to see those repetitive untargetable R + E outplay again in Worlds. She will now scale much harder into the late game, and her E will be more painful if her enemies are not careful enough. The buff will be probably too excessive for those who have to deal with the love birds trash talking in the SoloQ, as Rakan recently got a buff as well.

After a series of nerf hammers bludgeoned Varus several patches ago, Riot decides to give him some power back, but his lethality build should remain buried since it is so obnoxious to play against. On-hit Varus (or crit Varus build) should see a surge in the play rate once more.

It has been announced that Kai’Sa is going to receive another Prestige Edition of an unknown upcoming skin, and Riot has made another buff for a potential sale while making her beefed up enough for Worlds to bring some #WorldsEpicADCBigPlay again. As if she is not an overloaded design already.

Judging by his high base AD and AD-heavy item build, the 10% increase can mean a lot to him by late game. Provided that players can hit his Q, however; to make the buff matters. We speculate that Aatrox’s pick rate will go up once again in Pro Play due to his game-changing team fight potential.

As if Gragas’ major AP ratios buffs across his kit weren’t enough, now he’s more resilient to physical attacks in addition to having healthier clear. Riot does genuinely seem to have an ugly bastard fetish.