League PBE: 2 new Tank items are introduced into the game 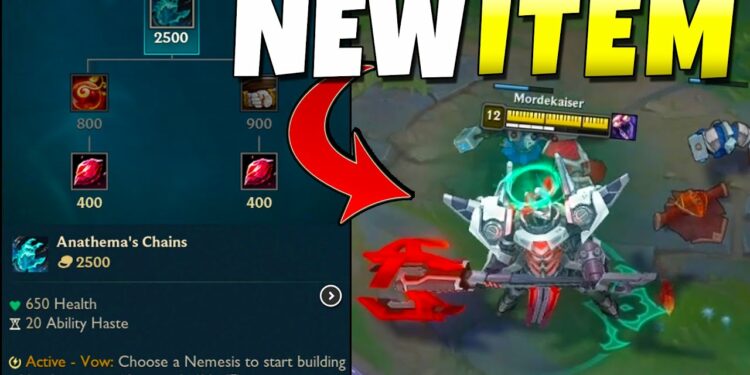 2 new items will be officially released in Patch 11.13

Riot Games has added another new tank item to the League of Legends PBE. Spideraxe, a game designer and credits for League wiki, recently posted on his Twitter on June 15, 2021 about this new tank item so-called Anthema’s Chains. This item was previously teased a few weeks ago when Riot discussed the itemization on their Dev Blog.

The tank item provides a massive 650 health as well as 20 ability haste. While the numbers are impressive on their own, the passive of Anathema’s Chains absolutely captures the game.

The item will cost you 2,500 gold in-game and will act as a Legendary item under the new classification system. This is considered a very cheap item for such high stats and a “broken” passive.

Another tank item named Elderplate was also on the League PBE, however, it has no effect on the current build of the game. Instead, the item costs 2,900 gold and provides 400 health, 50 magic resist, and 10 ability haste. This item is made of Negatron Cloak, Kindlegem, and Ruby Crystal. More information on the Elderplate item is scheduled to be disclosed shortly.

Anathema’s Chains is currently available for testing on the League PBE for patch 11.13 and as for the other tank item: Elderplate will be further investigated in the future. Anathema’s Chains will be released with Patch 11.13, which will be available on live servers around June 23.