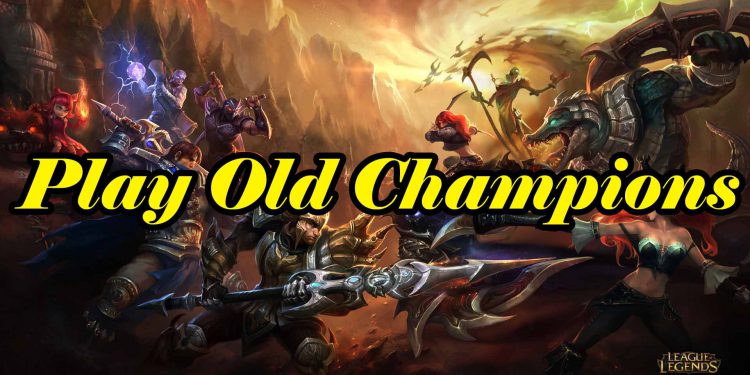 Play old champions – For League of Legends players to witness the development of this game is really moving. More than 10 years ago, League of Legends appeared on the MOBA game market under the management of Riot Games. As soon as the game was released, we could see the interface was very simple with graphics very simple at the time.

And now, after more than 10 years of development, we have been able to witness its outstanding development with outstanding graphics from many updates by Riot Games.

But for many players, seeing their favorite champion be completely redone or changed appearance and been edited too many times by Riot Games, this is a pain that few people have can understand

But what if Riot Games launched a new game mode that allowed us to play those champions again?

Recently, while I was wandering on Facebook of girls, I suddenly found a very good idea and wanted to share with you, I think if this idea becomes true, what will happen?

What if Riot Games allowed us to play old champions

We think this is a great idea, because for long-time players, these champions have been memorized in part of their memories and when they have to witness champions being reworked or corrected adjustment many times, this is a sad story for them

But what if Riot Games launched a mode that allowed us to recall a time of legend?

The Fiora, Sion, Warwick, Galio, Gangplank, Akali, Irelia … and many other champions have been remade and the next will be Fiddlesticks and Volibear?

What if they are once again allowed to return to Summoner Rift and is this possible? – Play old champions

Here is our own opinion, you can also contribute your ideas below

The next idea we came up with, is why they didn’t think of a bolder new direction for their game? Create League of Legends version 2 with the name of League of Legends Future Games and learn how to develop it from the smallest things, thoroughly tested before the official launch and allow the whole Can players try and give their opinions on the changes of Riot Games and from there can they make the most accurate adjustments?

The final idea we make here is that they create a new future for their current game by thinking of a new direction on the current Client of League of Legends? That is, they integrate the things that have appeared in their development. For example, can you combine the maps of League of Legends together or allow champions before and after the remake to appear on the battle to see which champions are stronger?

However, this is only a player’s own idea and we only raise our opinion. But what if one day Riot Games noticed it and started growing?