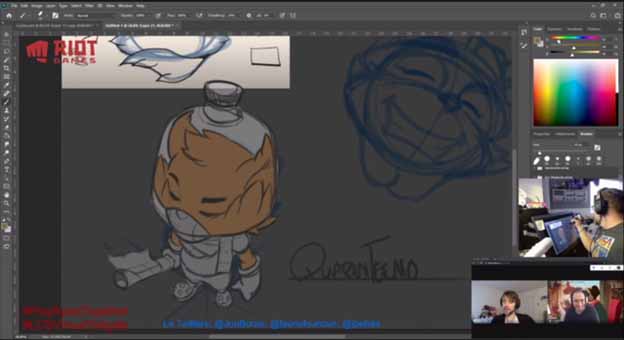 Of course, Riot Games painters will go through the process of creating the Isolation Teemo skin at home.

Although the LCS Spring 2020 must be played online, it does not mean that Riot Games does not create accompanying programs to warm up for this tournament. This weekend, the 2 losing finals and the final of the LCS will take place, but the events leading to it have happened today.

According to the LCS’s schedule, they will start with “Art day”, which is the time for Riot’s artists and the community to create great skins for League of Legends. Amongst them were the stream program of Riot Games artists and the costume design team, specifically for most of the stream, they came up with the idea and designed the Isolation Teemo skin with protective clothing medical protective masks and epidemic masks. The message is extremely clear – “League of Legends has done isolation and so do you”.

During this design period, the costume design team also received a lot of questions about the skins of world champion FunPlus Phoenix. Perhaps the members of the skin team really like Nautilus, so they must regret because Doinb chose Malphite over Nautilus.

Riot Games is making a respectable effort to join and repel the damage caused by Coronavirus. Hopefully, after the large amount of money that Riot Games has donated, the spreading of meaningful messages will also contribute to raising the awareness of gamers, joining hands with society to overcome this difficult period.

Wild Rift has inadvertently been confirmed to release this year

It is true that while the epidemic is under stress. These small but meaningful messages also contribute to fighting the disease, at least not making it contagious again.