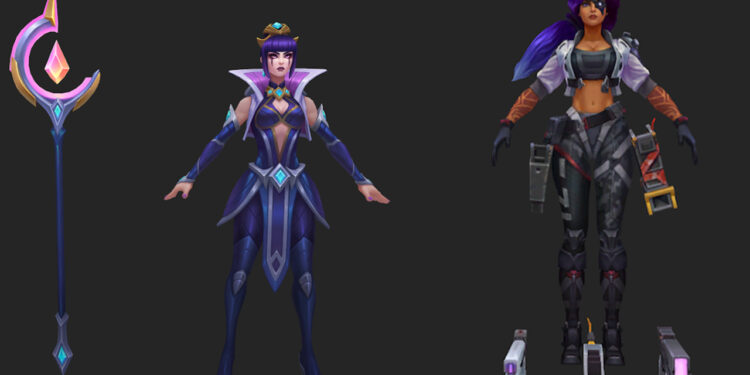 With 6 skins flaunted on the PBE cycle today, including the much anticipated remaining PsyOps skins hinted in PsyOps Sona’s voice over several weeks ago, and Championship LeBlanc, only 24 skins left for this year, according to Riot’s schedule teased earlier in 2020.

We have Championship LeBlanc clad in blue and purple with redesigned prismatic effects to accompany the major color scheme of the skin, with a neon show recall animation as the icing on the cake. We speculate that this will be one of the Deceiver’s most sought after skins, if not the most desirable cosmetic content of hers.

Also on this patch, PsyOps Samira is revealed along with the champion herself, donning her mercenary outfits with blue hair and the eye patch to emphasize her badassery (the eye cover is present in her default as well, we have no information on whether this is purely cosmetic or she really has one of her eyes wounded).

PsyOps Kayle, Zed, Viktor, and Pyke will arrive along with Samira, completely with redesigned futuristic animations and hi-tech black armor for everyone. This is a new tech on cyberpunk skin theme, previously dominated by skinlines such as PROJECT, Battlecast, Pulsefire,…

A self-described “savior” and powerful psionic swordswoman, Kayle views herself as an impartial judge in world affairs, appearing on wings powered by psychic energy as an angel of war. Her understanding of the world is black and white to a frightening extreme, and she has joined the paramilitary BRG to see her twisted vision realized.

While these revelations are tentative in nature only, we will keep you updated as more information comes into light. Follow notagamer.net for more League of Legends news.