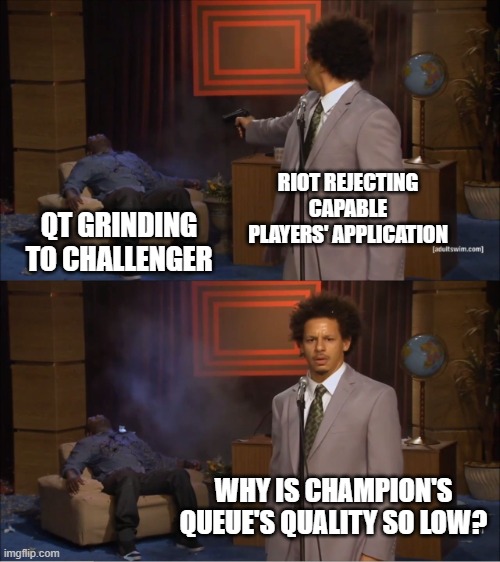 During episode 7 of DoubleLift’s podcast Trash Talk, it was revealed that prominent NA ex-LoL streamers QTpie and Shiphtur both grinded to challenger to apply for Champions Queue and got rejected. The episode’s guests including Shiphtur himself as well as other LoL personalities such as Scarra, Voyboy, Saintvicious were visibly appalled at the decision. The timestamp is at 50:22.

What is Champion’s Queue?

Champion’s Queue is a competitive matchmaking experience hosted on a private Discord server designed for the best West Coast North American players. Prizing will be distributed among the top competitors across three seasons throughout the year.

According to Phil Aram, executive director of LCSPA, the gameplay team at Riot themselves controls who is allowed to play in CQ and how many, after weighing the impact on NA solo queue.

Michael “Imaqtpie” Santana was one of the biggest NA LoL streamers who regularly pulled in more than thousands of viewers on Twitch and definitely still got it if he’s able to grind to Challenger. His exclusion from CQ and consequently migration to Valorant most certainly hurt the NA LoL scene, leading a lot of people to question the decision making at Riot. Having skilled, popular streamers in CQ would improve its quality as well as popularity and create content healthy for the game’s growth.

The reason for the rejection was never revealed. Perhaps the name Riot reflects on the company’s specialty of shooting themselves in the foot.

Check out the trailer for LoL’s latest champion here.