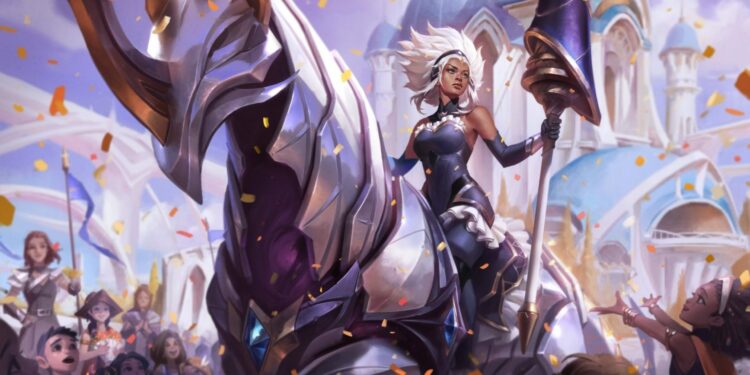 Rell is officially released in Patch 10.25. She is one of the rare champions that owns so many crowd-control that can impact the whole team fights.

The release of Rell really brings fresh air into the same old boring support scene. For all the new support champions that came out in the last season, Riot has to tweak them a little bit too overextend to make them more fun to play (Pyke with crazy killing ultimate, Senna with the capability of being an AD carry herself, or an unkillable Yuumi not until she leaves her ally). Now, Rell really brings back the original support feeling that everyone is looking for, let’s check out her build and some tips to destroy Summoner’s Rift.

All the pictures are taken from Koreanbuilds, these are all high-elo player that really know what to do and which items to purchase.

While running Aftershock will guarantee a little be more damage to Rell and also add up the tankiness that she already has. Hextech Flashtraption really helps any kind of slow champions that want to initiate while your opponents are being distracted. Bone Plating, Font of Life, and Unflinching all help Rell to survive longer in a big team fight and also provide slight healing for your teammates.

Rell definitely wants her Q to max out first. Her Q will deal significant damage in early-mid fights. After that, it’s your choice to choose between going for W or E second. While her W provides better versatility and also adds a little bit of damage when thinking carefully the only stun that Rell can guarantee to land is actually E, so reducing E’s cooldown is actually pretty neat in lots of situations.

Rell’s playstyle is somewhat similar to Leona’s. She is tanky who wants to dive deep into the enemy’s line and owns lots of quality crowd-control. Due to the interaction of her ability, she won’t shine until she reaches level 3. Her Q – Shattering Strike will be the only way that she can deal damage and it’s quite huge in the early-mid stage. Her E – Attract and Repel not only acts as one of the most crucial stun, but it also provides some healing for the ally that is currently linking with you. Keep that in mind when you want to link to another ally rather than your carry because Rell doesn’t have any healing ability other than that.

Your W1 – Ferromancy: Crash Down and W2: Ferromancy: Mount Up is great to initiate team fights. If you have any ally that can also initiate combat such as Malphite, Pantheon, Amumu, or Nunu, etc. You can wait until later if your team needs that extra amount of crowd-control to finish them down or preserve them to save your carry when all the Assassins come after them.

Her Ultimate – Magnet Storm is not really that impressive as you think. You won’t be able to drag your enemies the whole time, so you probably should keep them tight in that tiny moment for your carry to blast their skills properly will be a better idea than dragging them back like Skarner’s Ultimate.