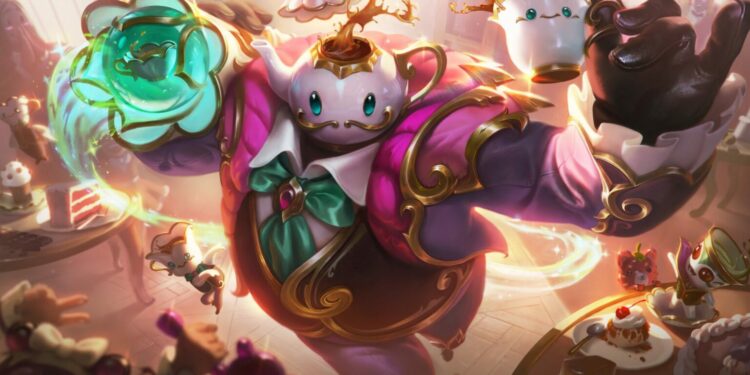 With a bright and cheery new skin range showcasing a variety of champions, Riot is bringing back its tastiest stylings

Riot Games has released the newest skin line for League of Legends, Cafe Cutie. The new skin line takes the idea of a fanciful cafe to a whole new level. Annie, Gwen, Sivir, and Soraka are among the characters who will receive a skin, which fits with the quirky coffee shop’s aesthetic. Others, like Vladimir, tried to put a comedic spin on a much darker figure, with varied results.

Bright pinks, rich purples, and golds with white porcelain are a prevalent aesthetic theme in the skin line. It’s a lot more optimistic perspective on cosmetics for League of Legends champions after skins like Dragonmancer, the Ruined skin line, and more.

With the cutie content that fits the female champions, Bard and Vladimir seem odd yet Riot still makes them match with the Cafe Cutie theme.

Cafe Cutie Bard has received accolades in especially for how well it implements the notion of animated food. Bard takes on one of the most absurd conceptions of sentient dishware, drawing evident inspiration from Disney’s animated series.

And for Vladimir, after a streak of bleak and dark variations on champions, the skins appear to be adding a touch of color. It’s not a skin line that every Vladimir player will be dying to get their hands on, but the majority of the new skins are too sweet not to persuade at least some of them.

The upcoming Cafe Cutie skins are expected to cost 1,350 RP apiece, like with most new skin releases, though Riot has not yet confirmed the official.

The skin line will be available for testing on the League PBE soon, and the skins will most likely be released on live servers later this month.