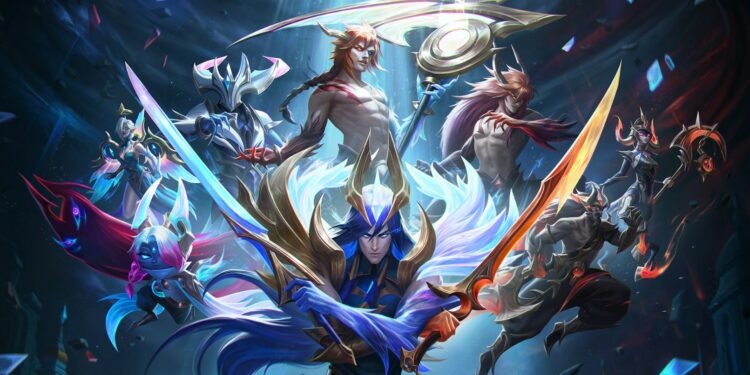 Riot Games has revealed details on the upcoming League of Legends skin line.

After the Sentinels of light event, League of Legends universe is about to welcome another great battle between Dawn and Night. This information has been officially confirmed by Riot Games after the launch of the teaser introducing these new skins called Severing Fate – Night & Dawn 2021.

Riot Games has been quite active in terms of in-game cosmetics. This is also included by the Coven, Crime City Nightmare, Phoenix and the newest PENTAKILL.

The teaser features Kayn and Yone as the 2 main characters

In the video, it is easy to recognize the only 2 character of this year’s Dawnbringer – Nightbringer teaser are Yone and Kayn. In it, Yone is expected to be a champion with a Mythic skin, while Kayn will attach a Prestige one.

Riot has yet to provide individual splash arts that will be featured in League of Legends. It has, however, published the whole list of champions who will be included in the skin line. The champions are as follows:

Vex will also get her first skin as in the Dawnbringer – Nightbringer skin line. Vex was scheduled to arrive in September. She will almost certainly be added to the game with patch 11.19. This implies that the Dawnbringer Vex, among with others, will also be included in the 11.19 patch.

The price and release date have yet to be determined. However, given that Vex is part of the line, players are likely to see it around the later half of September.

League of Legends players might be confident to know that the Dawnbringer – Nightbringer 2021, particularly the two champions in the teaser, will be of the highest expectation, Yone and Kayn.