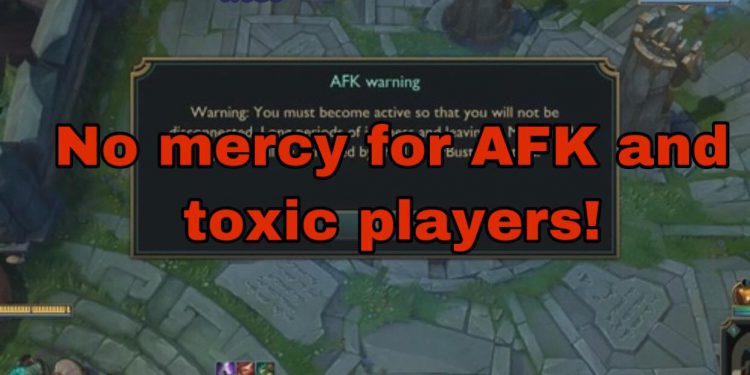 Riot Games plans to give AFK players harsher punishment, the developer revealed in a recent update on combating game-ruining behaviour.

There is no mercy

Back in May, Riot shared its plan to stop the game-ruining behavior in solo queue. Riot is starting to reconsider its penalty system after a month of research and the deployment of some small fixes to solo queue.

“Our penalties for AFKing rely too much on queue penalties (like when a player dodges in champ select). We should be using other more significant penalties more often”, design director at Riot Games Andrei “Meddler” Van Roon wrote.

Riot conducted a post-game survey, and out of all game-ruining behaviors, going AFK and intentional feeding are the players’ most commonly frustrating. AFKing is so popular in game that Riot works on its detection algorithm to better punish the players who do it appropriately. Temporary bans from the game are among the possible punishments.

Fixing solo queue requires more than just punishments. Right now, Riot takes into consideration the behavior in a single game and doesn’t consider the history of offending players. It leads to players abusing the system, since they know how far can they go before facing any consequence.

An improved detection algorithm should be able to detect when a player deliberately disconnects or starts feeding intentionally. Discovering these patterns is the key to punishing players that are wreaking havoc in solo queue.

The next step is to implement a report button on the champion select screen. This button should be used when a player is holding a hostage role, locks a troll pick or threatens to feed. Riot plans to implement it on July 8 with patch 10.14, though if it isn’t ready by that date, it’ll be delayed to patch 10.15 on July 22.