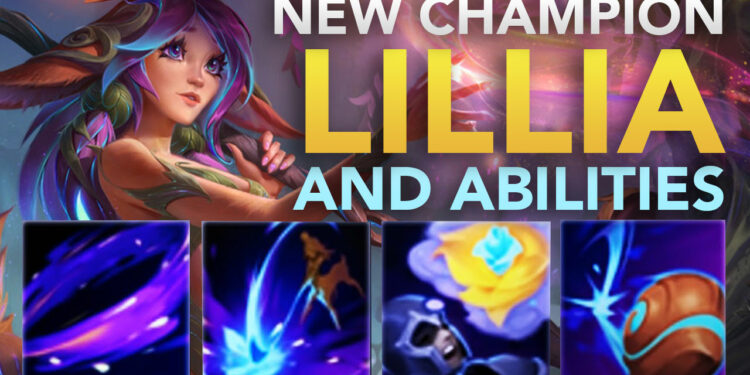 The new champion’s Lillia kit seems focused on nature power (like Ivern), her eye-catching visual effects and an attractive look doesn’t mean that she won’t dealing any damage. Each of her abilities seems offensively focused and we expect Lillia a jungle main Champion.

Her abilities mostly rely on her passive and deal extra damage over a duration, especially her Ultimate need passive mark to deal immense of damage and crowd control. In the case of her Q, she can deal true damage when hit those who at the outer edge of the circle, a very typical playstyle in League, similar to Darius, Aatrox…

Lillia’s abilities apply Dream Dust, dealing a portion of the target’s maximum health as magic damage over a duration.

Lillia swings her branch in the air and deals magic damage to nearby enemies, dealing true damage to those at the outer edge of the circle. When she successfully lands the attack, Lillia also gets movement speed.

Lillia winds up for a huge strike with her branch, dealing magic damage to enemies. Enemies at the center of the impact receive more damage.

Lillia lobs a Swirlseed overhead, dealing Magic damage to enemies and slowing them for a duration. If Lillia’s Swirlseed misses, it’ll continue to roll until it hits an enemy or collides with the terrain.

Lillia casts a lullaby over her enemies and those affected by her Dream Dust become increasingly slowed before falling asleep for a duration of time. When awakened by damage, enemies take additional magic damage.

You can check SkinSpotlights for more details: