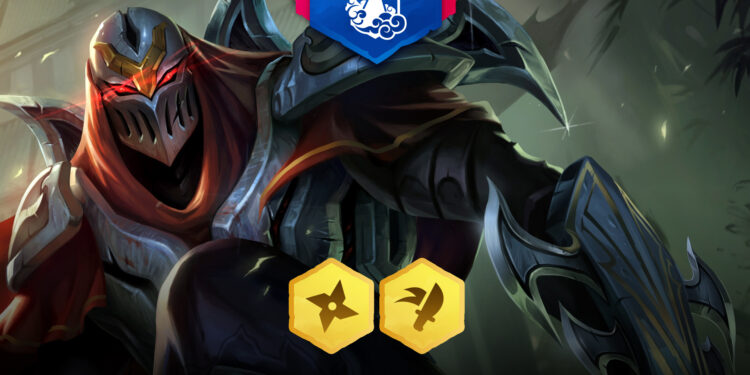 It seems that everything is all already planned by Riot for the next big New Year party in the Convergence!

Recently, Teamfight Tactics official Twitter has had a new post about Zed and his new trait – Slayer. According to the post, Slayers deal more damage to low health champions and gain lifesteal as they themselves approach death. It is the replacement of the old trait of him – Shade. Zed with Shade is somehow dangerous when he can deal a lot of additional magic damage and clear fast enemy’s backline. With this change, he may be built like a gladiator instead.

The Head of game designer Stephen “Mortdog” comment that Zed isn’t an “aggro drop” but will deal more damage and steal more life. There’re still lots of questions to concern about him. Without Shade, will Zed jump the backline so far? And with the new trait, how much does he cost in the battle? There is no telling what will happen with the Master of Shadows.

You know, Riot usually wants everything to be kept in secret and just slowly revealed to draw the curiosity of fans. Things seem like going this way until … a fan leaked an infographic picture of the new patch’s traits. The information is still not confirmed by Riot but it’s a good thing to scan through!

According to the picture, the removal of 6 traits will brings up to 7 new traits, and also some new champions in valid traits. Check it out!

The dragons are coming back and more dangerous than in the past! Still, remember the Dragon in season 2 with Aurelion Sol and Shyvana? Now it’s coming up to SEVEN champions! The name is Tristina, Pantheon, Brand, Braum and so more.

Another hot pick in Summoner Rift has come to TFT – Samira! With only her in a special-named trait, she’s expected to be the next 5-gold champion that could carry the late game with the powerfull skill set!

A mysterious trait with the name recall the old story told in old villages! They could be Nautilus (confirmed to be released on 11.2 ), Neeko, and Cho’gath according to the skin small pictures.

Definitely, Ornn will present in the party and his role is Blacksmith. He will come into the combat and start forging an Artifact item! What an interesting role! Let’s wait to see his own special performance in the game!

Morgana, Nasus, Vladimir will gather in the super healing team called Syphoner. They deal damage and also heal to all the allies and themselves. Will there be any infinity healing station in the party?

With these upcoming changes, Riot wants to make the game more balance and funny for the rest of the season. We hope that will end up a great result, the more worthy gameplay, more new great meta!

All things have shown up there. But nothing’s certain until January! Keep calm, claim up with the old team comp and hear about the next update of the Convergence from Riot! Wish we will have a beautiful ending to the year 2020!

Invitation to the Festival of Beast: riot.com/37hxXWP